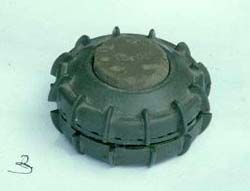 The re-settlers were concerned regarding the threat of land mines when a powerful landmine was found near a house at Anandapuram yesterday (30th). It was found when a resident tried to cut a drain to prevent rain water entering his house.

A group of landmine clearing organization had arrived and deactivated the land mine. The deactivators had said the land mine was a very powerful one and a massive destruction would have been caused if it had exploded.

The bomb that killed a girl too had been found at an area where the displaced had been resettled. The residents say officials have resettled the displaced without completing the demining process.