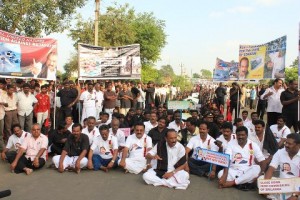 In the backdrop of protests against SL President Mahinda Rajapaksaâ€™s visit to Madhya Pradesh, Chief Minister Shivraj Singh Chouhan on Friday said it was expected from Sri Lanka to treat Tamils with equality and Colombo should highlight steps taken by it in this direction to clear doubts in the minds of people of both the nations.

Stressing on strong and cordial relations between India and Sri Lanka, Chouhan said that â€œit was expected from the island nation to treat Tamils with equality and the President should highlight the work being undertaken by his government in this regardâ€ during a brief interaction with Rajapaksa in the State Hangar, official sources said.

â€œThis will help in clearing all doubts on the minds of the people of the two nations,â€ Chouhan said.

Rajapaksa arrived in Madhya Pradesh to lay the foundation stone for the Sanchi University of Buddhist and Indic studies amid protest by MDMK with its leader Vaiko along with his supporters being arrested as they tried to move from Gadchicholi to Sanchi to protest the Sri Lankan Presidentâ€™s visit.

The Sri Lankan President also gave approval for setting up a study centre at the Sanchi Buddhist University campus in Sanchi. (PTI)