A new report released today says both the army and police used schools during the war against the LTTE.

Between January 2005 and October 2012, the study found, armed forces and armed groups used education institutions in at least 24 countries, a substantial majority of the countries with armed conflicts during this period. The list included countries in Africa, Asia, Europe, the Middle East, and South America. 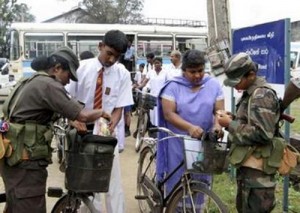 The 77-page study, â€œLessons In War: Military Use of Schools and Other Education Institutions during Conflictâ€, examines the use of schools and other education institutions for military purposes by government armed forces and opposition or pro-government armed groups during times of armed conflict or insecurity. Schools are used for barracks, logistics bases, operational headquarters, weapons and ammunition caches, detention and interrogation centers, firing and observation positions, and recruitment grounds.

The use of schools and other education institutions for military purposes by armed forces and non-state armed groups during wartime endangers students and their education around the world, said the Global Coalition to Protect Education from Attack in the study released today.

â€œThe moment troops establish a base inside a school, they can turn it into a target for attack,â€ said Diya Nijhowne, director of the Global Coalition to Protect Education from Attack. â€œWhen soldiers use schools and universities they are often putting their own convenience over the safety and education of students.â€

The Global Coalition to Protect Education from Attack (GCPEA) is an alliance of United Nations agencies and organizations from the fields of education in emergencies, higher education, international human rights, and international humanitarian law, dedicated to addressing the problem of attacks on students, teachers, schools, and universities during armed conflict. GCPEA is governed by a steering committee made up of Education Above All, Human Rights Watch, Save the Children International, Scholar Rescue Fund, the United Nations Educational, Scientific and Cultural Organization (UNESCO), the United Nations High Commissioner for Refugees (UNHCR), and the United Nations Childrenâ€™s Fund (UNICEF). â€œLessons In War: Military Use of Schools and Other Education Institutions during Conflictâ€ is the result of an independent external study commissioned by GCPEA. It is independent of the individual member organizations of the Steering Committee of GCPEA and does not necessarily reflect the views of the Steering Committee member organizations.