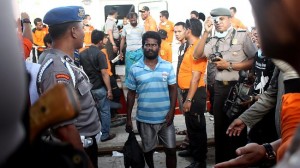 The Sri Lankans who arrived undetected in Geraldton harbour in Australia on Tuesday were flown to Christmas Island, as refugee advocates voiced concerns the group was being shielded from lawyers, The Australian newspaper reported.

Most of the 66 passengers aboard the donated Deutsche Bank vessel, whose stealth arrival to the mainland triggered an internal Customs and Border Protection review, left Perth last night for Christmas Island.

As the political fallout continued over how the boat managed to evade authorities, Refugee Rights Action Network spokeswoman Victoria Martin-Iverson said advocates and lawyers were not given access to the male asylum-seekers, who had been held in a separate area within the Northam detention centre.

Ms Martin-Iverson said if the government sought to repatriate the group to Sri Lanka without properly assessing their claims it would be a â€œrather extreme stepâ€ that violated Australiaâ€™s responsibility under international law.

â€œWeâ€™ll treat people equally and fairly under the law, and weâ€™re not looking to make an example of anyone,â€ Mr Oâ€™Connor told ABC Radio.

An Immigration spokesman last night said officials would â€œrespond to any request that they (the group) would put to us, whether that be for information or for access to a lawyerâ€.

But refugee advocate Marion Le said if the group of Sri Lankans were intending to go to New Zealand, as they suggested on arrival, the government was on shaky legal ground detaining them.

â€œI question whether they have any legal right to take these people into custody in the first place, it is a live legal question,â€ Ms Le said.

Ms Le said given the group had managed to reach the busy West Australian port before Laborâ€™s laws to excise the mainland from the migration zone passed the parliament means any attempt by the government to immediately turn them around would be â€œa very serious breach of international lawâ€.

A spokesman for the United Nations High Commissioner for Refugees also warned that if â€œpeople claim asylum in Australia, they are entitled to a full and proper assessment of their claimâ€.

Opposition immigration spokesman Scott Morrison said Laborâ€™s delay in passing the legislation to excise the mainland had â€œleft the sea gate open for people-smugglers to send their boats to the mainland directâ€.