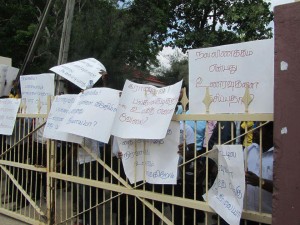 Teachers and workers of the University of Jaffna staged a peaceful protest against Sri Lankan police and Army today to strongly condemn the action against Tamils, when they attacked University students two days ago. The demonstration held from 11.00am saw teachers holding placards in front of the University gates. The teachers union of University said that the police and military had brutally handled the peaceful protest staged by students and accused forces of entering both men’s and women’s hostels without any authorised permission. “The Army entered the women’s hostel without any female soliders or police offices during the night. This is not acceptable,” said Mr. Amirthalingham Irasakumaran, President of teacher’s union. Earlier today, workers union of University of Jaffna boycotted their duty due to the same reasons. The union blames the vice chancellor, registrar and acting registrar of University as they did not take any initiative to protect the students, even though their were on leave. “It is their duty,” said union leader S.Thankaraja. This is the second demonstration within three days in University, first was held by the students on Wednesday. University students continue to boycott classes two days after the attack took place on Wednesday.]]>