<![CDATA[ <p id="story_continues_1">LG has launched a 55in (140cm) OLED TV – kickstarting a battle over the next-generation of high-quality screens.

OLED – which means organic light-emitting diode – is more energy efficient than LCD (liquid crystal display) and plasma-based alternatives. LG’s model will be sold in South Korea first with other markets, including Europe, to follow thereafter. Both LG and Samsung announced 55in OLEDs last year, but LG is the first to make its available. The firms showcased their televisions at last January’s Consumer Electronics Show (CES) in Las Vegas, but until now neither company had managed to get a product to market. LG’s headstart on its rival helped give it a 5.4% share price boost on Wednesday. The 1080p (1920 x 1080 pixels) OLED television will sell for 11 million won ($10,300; £6,300). Analysts said the technology was unlikely to become more affordable until at least 2015 – but that this latest release was more about cementing LG’s position as a market leader. That said, global sales of OLED televisions are expected to grow to 1.7 million by 2014, according to research firm DisplaySearch. Bendy OLED screens have been touted as the successor to the popular liquid crystal displays (LCD). The technology allows for the display of darker and deeper blacks, and can be made thinner than competing display methods. Smaller OLED screens are already in mass distribution. Samsung uses the technology in its smartphones, and Sony’s PlayStation Vita handheld console also utilises the thin, light technology. generation of “bendy” gadgets, some of which are expected to be unveiled over the course of the year. 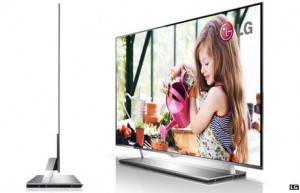 But larger OLED screens have proven difficult to manufacture due mainly to cost and reliability constraints. Another technology, known as 4K, has also been given a lot of attention from manufacturers. Dubbed “Ultra HD”, 4K offers 8 million pixels per frame – four times the resolution of 1080p high-definition displays – making it particularly well suited for extra large screens. 110in (279cm) models are expected to be put on show at CES next week. Existing 4K TV sets are LCD-based. But according to some purists, OLED offers a richer quality display so might be the better option for 55in screens. (BBC)]]>