A SEVEN-minute hell ride through blast-furnace heat, a pinpoint landing and two happy snaps have begun the most ambitious and expensive attempt to prove life on Mars. 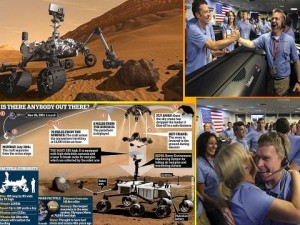 The $2.5 billion Mars rover Curiosity landed on the red planet about 3.18pm, the signal reaching us 14 minutes later across the 567 million km abyss of space.

With millions watching a live stream from NASA, and an agonising seven-minute blackout after the probe tore into the Mars atmosphere at 17 times the speed of sound, scientists erupted at the announcement: “We’re safe. We’re on the surface of Mars”.

Within minutes, two pictures of Mars – one showing the rover’s shadow – arrived here, and with almost two years now to find the chemical clues of life, the sky is no longer the limit.

Until just before landing, the rover was under the watchful eye of Canberra’s Deep Space Communication Complex, the Parkes, NSW, radio telescope made famous in the movie The Dish and another aerial in Perth.

The mountain’s layers provide a window into tens of millions of years of Mars’ history, and, scientists hope, a time in the planet’s history when life bloomed.

The crater will also be tested as it would would be likely to have held liquid water.

In Melbourne, Monash University geoscience lecturer Marion Anderson watched with 150 others at the Victorian Space Science Education Centre in Strathmore.

She was one of about 1000 scientists who narrowed down potential landing sites over eight years by “shooting down in flames” prospective sites until only four remained.

Ms Anderson said Gale Crater was was safe to land, not too many boulders or sand dunes, and had “the exactly right rock”.

“I don’t know if it’s possible to hold your breath for seven minutes, but I tried,” the jubilant scientist said just after Curiosity touched down on time and on target.

“Everything that could go right went right.

“We have a bouncing baby robot. It is alive. It’s sending back pictures. I’d be jumping up and down if I wasn’t on the phone.” 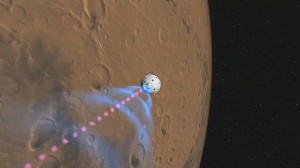 Elsewhere in Australia, and at NASA’s Jet Propulsion Laboratory, applause met every successful step when the craft was again in contact after what the space agency dubbed “seven minutes of terror”.

At “touch down confirmed”, space scientists whooped wildly and hugged each other, some in tears, and again at the words: “We’re safe. We’re on the surface of Mars”.

The rover was sandwiched between a heat shield and protective back for the descent. Parachutes were deployed, then thrusters, and finally a sky crane gently lowered the world’s most expensive vehicle.

It carries 10 instruments, including a rock-vaporising laser, for the three pronged mission.

The prime goal is to find whether Mars could have supported life but it is also to study the icy planet’s climate and geology and to collect information for future manned missions. (Herald Sun).