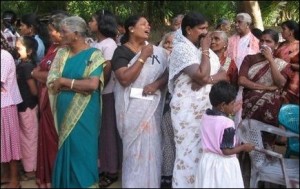 The visiting Japanese peace envoy, Yasushi Akashi said that LLRC committee members had told him it would take five years to implement the LLRC recommendations. “I asked the chairman of the select committee when that will start. The date was July 25, 2012 when SL Cabinet approved the action plan. But I think in terms of guess work here, we have to adjust and change as it goes on. A specific time frame is difficult to maintain. It’s a matter for politicians and political parties,” the Japanese envoy told a specially convened media conference held at the end of his five day tour in the island. Akashi said there were some recommendations that would be implemented within three to six months. He stressed that there is tremendous work still to be done for the Tamils in the North. He added that the Northerners need to be empowered economically, socially, politically and psychologically, although 98% of the Internally Displaced Persons (IDP) have been resettled.  ]]>