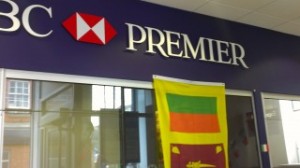 The local community of New Malden, Surrey, is enraged at the insensitivity of the HSBC bank for its display of Sri Lankaâ€™s Lion Flag in its New Malden branch, Tamilnet reports.

In making a request addressed to its manager, Ms. Sam Fletcher, the local community members said, â€œHSBC prides themselves in being the local bank and we hope that this also involves for them to be aware of our local issues.â€

The protestors pointed out that as most of the islandâ€™s community in the UK are victims of State with memories of torture, rape and massacre, they are greatly upset at seeing the flag reminding them of the horrors. The protest, led by even non-Tamil South Asians in New Malden, cited support of local parliamentarian, Mr Edward Davey. The London-based HSBC was the first foreign bank to initiate a branch in Jaffna. It has 16 branches in the island labelled Sri Lanka.