Britain’s Queen Elizabeth declared the London Olympics open after playing a cameo role in a dizzying ceremony designed to highlight the grandeur and eccentricities of the nation that invented modern sport. 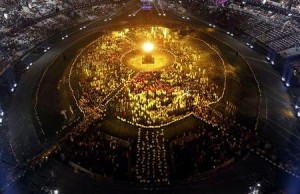 Children’s voices intertwining from the four corners of her United Kingdom ushered in an exuberant historical pageant of meadows, smokestacks and digital wizardry before an audience of 60,000 in the Olympic Stadium and a probable billion television viewers around the globe.

Many of them gasped at the sight of the 86-year-old queen, marking her Diamond Jubilee this year, putting aside royal reserve in a video where she stepped onto a helicopter with James Bond actor Daniel Craig to be carried aloft from Buckingham Palace.

A film clip showed doubles of her and Bond skydiving towards the stadium and, moments later, she made her entrance in person.

“This great, sports-loving country is widely recognized as the birthplace of modern sport.”

In one moment of simple drama, the stadium fell silent as five giant, incandescent Olympic rings, symbolically forged from British steel mills, were lifted serenely out of the stadium by weather balloons, destined for the stratosphere.

And at the climax of an evening that had children centre-stage, seven teenage athletes were given the honor of lighting the Olympic cauldron that will burn for the duration of the Games, in keeping with the theme of “Inspire a Generation”.

More than 10,000 athletes from 204 countries will compete in 26 sports over 17 days of competition in the only city to have staged the modern Games three times.

Most of them were there for the traditional alphabetical parade of the national teams, not least the athletes from Egypt, Tunisia, Libya and Yemen competing in their first Olympics since their peoples overthrew autocrats in Arab Spring revolutions.

Brunei and Qatar were led in by their countries’ first ever female Olympians and so, along with Saudi Arabia, ended their status as the only countries to exclude women from their teams.

At a reception, the queen spelled out the role played by her family after the Olympics were revived in Athens in 1896.

“Over recent months, many in these islands have watched with growing excitement the journey of the Olympic torch around the United Kingdom. As the torch has passed through villages and towns, it has drawn people together as families and communities.

“To me, this spirit of togetherness is a most important part of the Olympic ideal. And the British people can be proud of the part they have played in keeping the spirit alive.”

The opening show, costing an estimated 27 million pounds ($42 million), was inspired by William Shakespeare’s play “The Tempest”, his late-life meditation on age and mortality.

But it was children who set the tone, starting from the moment when live pictures of junior choirs singing in the landscapes of England, Scotland, Wales and Northern Ireland were beamed into the stadium’s giant screens, four traditional songs woven together into a musical tapestry of Britain.

Oscar-winning film director Danny Boyle began his sweep through British history by grassing over the arena in a depiction of the pastoral idyll mythologized by the romantic poet William Blake as “England’s green and pleasant land”.

Idyll turned swiftly to inferno as the Industrial Revolution’s “dark Satanic mills” burst from the ground, before those same mills forged the last of five giant Olympic rings that rose into the sky.

At the end of a three-hour extravaganza, David Beckham, the English soccer icon who had helped convince the IOC to grant London the Games, stepped off a speedboat carrying the Olympic flame at the end of a torch relay that inspired many ordinary people around Britain.

Past Olympic heroes including Muhammad Ali, who lit the cauldron at the 1996 Atlanta Games, and British rower Steve Redgrave, the only person to win gold at five successive games, welcomed the flame into the stadium.

Yet it was not a celebrity but seven teenage athletes who lit a spectacular arrangement of over 200 copper ‘petals’ representing the participating countries, which rose up in the centre of the stadium to converge into a single cauldron.

Moments later, a balloon-borne camera relayed live pictures of the earlier-released interlocked rings gliding through the stratosphere against the curved horizon of the planet below.

Many sequences turned the entire stadium into a vast video screen made up of tens of thousands of “pixels” attached to the seats. One giant message, unveiled by Tim Berners-Lee, British inventor of the world wide web, read “This is for Everyone”.

Until the last few days, media coverage had been dominated by the security firm G4S’s admission that it could not provide enough guards for Olympic venues. Thousands of extra soldiers had to be deployed at the last minute, despite the company’s multi-million-dollar contract from the government.

Suicide attacks that killed 52 people in London in July 2005, the day after it was awarded the Games, ensured that security would remain a worry. And this year the Games mark the 40th anniversary of the 1972 Munich massacre, when 11 Israeli Olympic team members were killed by Palestinian militants.

Although no medals will be awarded until Saturday, the women’s soccer tournament started on Wednesday, and on Friday South Korean archers set the first world records of the Games.

Im Dong-hyun, who suffers from severe myopia and just aims at “a blob of yellow color”, broke his own 72-arrow world record with a score of 699 out of a possible 720, leading his two colleagues to a record combined score as well.

The Games’ first medals will be decided in the women’s 10 meters air rifle final on Saturday, with the big action coming in the men’s cycling road race, where world champion Mark Cavendish is favorite to become Britain’s first gold medalist.

In the evening, Americans Michael Phelps and Ryan Lochte are scheduled to line up for a classic confrontation in the men’s 400 meters individual medley final.

Phelps, competing in seven events after winning a record eight gold medals four years ago in Beijing, is bidding to become the first swimmer to win gold in the same discipline three times in a row.

“This is going to be a special race,” said Gregg Troy, head coach of the American men’s team. “I can’t imagine a better way to promote our sport than a race like this on the first day.”