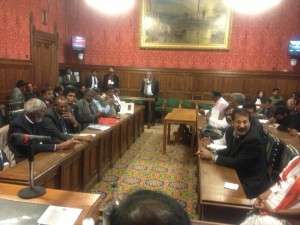 The World Tamil Conference held in London in the British Houses of parliament last week endorsed a historic resolution, stressing â€œthe United Nation member states to urgently set up an â€˜international independent investigationâ€™ into the complete conduct of the Sri Lankan State against the Tamil Nation and specifically call upon the investigation of War Crimes, Crimes against Humanity, and the Crime of Genocide against the Tamil peopleâ€.

The resolution also urged the leaders of the international community and the global civil society to: 1) Take immediate steps to create for free flow of information that would bring to light the ground realities prevailing in the North and East of the Island of Sri Lanka. 2) To stop decimation of the Tamil Nation by the Sri Lankan State. 3) To stop Sinhalisation of the Tamil traditional Homeland. 4) To demilitarise the Tamil Peopleâ€™s Homeland of the people to exercise their democratic rights free from fear of persecution.

The British MPs who addressed the gathering accused the United Nations and the International community for failing to fulfill their obligation in not invoking the â€œresponsibility to protectâ€ provisions to avert the humanitarian crisis of the Tamils in Sri Lanka. Describing what has happened in Sri Lanka against Tamils as genocide, the Vice Chairman of the All Party Parliamentary Group for Tamils (APPGT) Mr. Robert Halfon condemned the international community for not recognising the genocide of Tamils. Meanwhile, the chairman of the APPGT Mr. Lee Scott urged the international community to set up an independent investigation into the crimes committed by the Sri Lankan government and pledged his support for Tamils until they achieve their aspirations in Sri Lanka.

Liberal Democrat MP and the Vice Chairman of the APPGT Mr. Simon Hughes highlighted the stateâ€™s primary responsibility for protecting populations from war crimes and accused the Sri Lankan government for not abiding to this responsibility and committing serious war crimes during the final war. He also condemned the international community for not fulfilling its obligation to prevent this crime in Sri Lanka and described it as a â€œfundamental failure on the part of international communityâ€.

Senior political leaders of Tamil Nadu who addressed the conference unanimously iterated the urgency of setting up an international independent inquiry and pledged to work together hand in hand with the Eelam Tamil people.

TNA MP Suresh Premachandran and TNPLF Secretary General Gandrakumar Ponnampalam commended the conference as a timely and forward step. Suresh Premachandran emphasized that the international independent investigation is the way to resolve the conflict in Sri Lanka and stressed that peace is impossible without resolving the issue of justice. Meanwhile, Mr. Gajendrakumar Ponnampalam emphasised that the investigation in Sri Lanka should be focused on the genocide that was committed and continues to be committed against the Tamil people.

The following is the resolution adopted by the Conference:

Expressing our appreciation for their report on Sri Lanka by the Panel of Experts appointed by the UN Secretary General and noting in particular the reportâ€™s acknowledgment of the persecution and extermination of the Tamil people for political reasons on ethnic grounds.

Expressing our appreciation for the findings and recommendations of the Permanent Peoples Tribunal on Sri Lanka held in Dublin.

Noting with concern the continuing destruction of the Tamil Nation in the North and East of the Island of Sri Lanka, despite the end of war in May 2009, and the need for an immediate arrest to the present conditions of persecution of the Tamil people.

We urge the leaders of the international community and the global civil society to: 1) Take immediate steps to provide for space for free flow of information that would bring to light as to the ground realities prevailing in the North and East of the Island of Sri Lanka. 2) To stop decimation of the Tamil Nation by the Sri Lankan State. 3) To stop Sinhalisation of the Tamil traditional Homeland. 4) To demilitarize the Tamil Peopleâ€™s Homeland for the people to exercise their democratic rights free from fear of persecution.

There are several other organisations which are still continuing to endorse this resolution. An up to date list is available from the BTF website www.tamilsforum.com.

if you wanted to endose this resolution please contact BTF Admin on admin@tamilsforum.com.