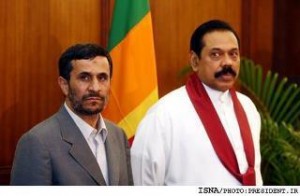 The Sri Lankan President Mahinda Rajapaksa will visit to Iran to attend the 16th NAM Summit to be held in Tehran. The 16th Summit of the Heads of State and Government of the Non-Alighted Movement is scheduled to be held from 30-31st August, 2012 in Tehran. Led by Rajapaksa, a fifty-member high power delegation, including Foreign Minister, Oil Minister, a business delegation and media persons, is visiting Iranâ€™s capital city, Tehran, Deputy Chief of Mission at Embassy of Iran in Colombo, Kioumars Kazemi told IRNA. He also said that bilateral meetings between the leaders of Iran and Sri Lanka, are also likely to take place on the sidelines of the 16th Summit of 120-nation grouping. Kazemi, while welcoming Rajapaksaâ€™s visit to Iran, expressed hope that the bilateral meetings between the leaders of the two friendly countries will further boost the relations between Iran and Sri Lanka. (IRNA)]]>