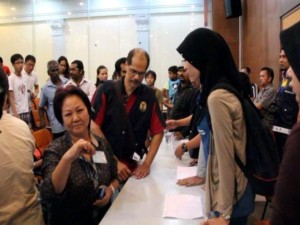 The screening of the movie, No Fire Zone, which explores the oppression of Tamils in Sri Lanka, was organised by human rights group Pusat Komas, the Star online reported.

Programme coordinator Lena Hendry said the officers entered the hall after the movie had finished.

She said Immigration officers also forced around 150 attendees to flash their MyKads for identification and also riffled through a bag belonging to a journalist.

â€œChinese Assembly Hall owners were contacted by Sri Lankan High Commission officials.Â They said the facts of the film were not right and urged them to stop the screening.Â We tried to fix an appointment with them to discuss it and even invited it to the screening. They said they would meet us but never showed up,â€ Lena claimed.

She said the officers tried to enter the premises as organisers attempted to negotiate with them.

â€œI donâ€™t want to say the High Commission was involved in this but the recent events leading to this raises questions,â€ she said.

Those detained were taken to the Dang Wangi police station to have their statement recorded.

However, when contacted, Dang Wangi deputy OCPD Supt Nor Azman Muhammad Yusof denied that police were involved in the operation.

â€œRefer to the other authorities on this matter. We are not a part of it whatsoever,â€ he said.

A financial analyst who who was at the screening said authorities asked the audience to flash their MyKads several times but did not jot down any particulars.

â€œHonestly, I think they really have no right to do that and they didnâ€™t even give any reasons for it,â€ she said.