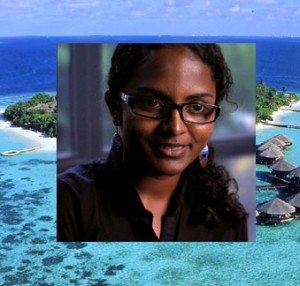 Maldivian opposition Democratic Party (MDP) Youth Wing President and Policy Secretary Shauna Aminath was arrested in Male this evening and is currently being held in police custody in the Dhoonidhoo detention island.

Hamid Abdul Ghafoor, the MDP spokesperson for International Affairs, told the Colombo Gazette in an email that at this time the charges against her are unknown.

Ghafoor said that the MDP is deeply concerned for Shaunaâ€™s safety, due to the documented abuses of other detainees held in police custody since the coup dâ€™etat on 7 February. The MDP calls upon the government of the Republic of Maldives for her immediate release.

Shauna was recently received at meetings with the U.S. Department of State, the U.S. Senate, the U.S. Congress, the United Nations and the Indian government as part of former President Mohamed Nasheedâ€™s diplomatic delegation to the U.S. and India.

â€œShauna is well known internationally for her non-violent pro-democracy work and for her climate change advocacy, and was featured in the film THE ISLAND PRESIDENT, about former President Nasheedâ€™s first year in office,â€ Ghafoor said.

She also had interactions with the Sri Lankan media after Nasheed resigned from the Presidency in February this year and later claimed he was forced to resign.