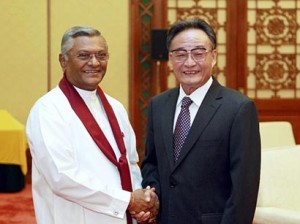 China will provide Sri Lanka a loan of US$ 500 million (Rs. 64.6 billion) for the second phase of the Sri Lankan Government’s Priority Roads Project in the north and the south.

The Sri Lankan President Rajapaksa has told his ministers in a Cabinet memorandum that the Government of Sri Lanka and the China Development Bank Company Limited (CDB) signed a Memorandum of Understanding (MoU) to establish a framework for cooperation. In terms of this MoU, the CDB has agreed to provide credit facilities to finance, inter alia, “infrastructure development projects with great significance to economic development.”

With the US$ 500 million provided by the CDB, Rajapaksa has told his ministers, 19 civil works have been awarded. These civil works are intended to rehabilitate 504.9 kilometres of roads in the Western, Southern, Central, Uva, Sabaragamuwa, North Western and North Central Provinces and 85 kilometres of provincial roads in the Nuwara Eliya District.

Two new flyovers at Hambantota are also to be constructed with the same funding.