<![CDATA[The Hamas leader Khaled Meshaal is to lead a rally in Gaza on Saturday to mark the founding of his Islamist group and celebrate what he claims is "victory" over Israel. <a href="http://www.eelamenews.com/?attachment_id=106970" rel="attachment wp-att-106970"> 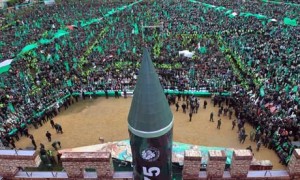 At least 200,000 Palestinians are expected to attend the outdoor event, which is likely to be used by Meshaal to promote Hamas’s growing stature in the Arab world and push the case for reconciliation with its secular political rival, Fatah. Thousands of supporters, many holding aloft Hamas’s green flag, gathered on rain-sodden wasteland ahead of the rally. Patriotic music blasted from loudspeakers, including the recent hit Strike a Blow at Tel Aviv. The song refers to rockets Hamas fired at the Israeli city in last month’s eight-day conflict, and a huge model of the Gaza-made M75 missile that took aim at both Tel Aviv and Jerusalem dominated the outdoor stage set up for the speeches. “This is a day of victory,” said Ahmed Shaheen, 60, sitting with his young children in front of the massive platform. “The presence of Khaled Meshaal is a sign of this victory.” Meshaal, 56, is on his first visit to the Gaza Strip and was moved to tears on Friday by the ecstatic reception he received from flag-waving crowds as he toured the tiny territory, which is home to 1.7 million Palestinians. His trip comes just two weeks after the conflict with Israel that killed some 170 Palestinians and six Israelis. An Egyptian-brokered ceasefire brought an end to the fighting. Hamas claims it won the war. Israel disputes this, saying it not only killed Hamas’s military commander, but also caused significant damage to its arsenal of rockets. The fighting boosted Hamas’s standing in the region, winning it the support of Arab neighbours, many of whom used to treat the group as a pariah before the Arab spring uprisings ushered in several sympathetic Islamist governments. “Israel must now be fuming as it watches this Gaza victory,” said Abu Waleed, 52, as he stood in a crowd on Friday, waiting to catch a glimpse of Meshaal, who survived a 1997 assassination attempt by Israeli Mossad agents in Jordan. Delegations from Qatar, Malaysia, Turkey, Egypt and Bahrain were all expected to attend Saturday’s rally, which commemorates the 25th anniversary of the founding of Hamas and the start of the first Palestinian uprising, or intifada, against Israel on 8 December 1987. Local Fatah leaders are due to attend – the first time the Palestinian president, Mahmoud Abbas’s faction has taken part in such an event since at least 2007, when it fought a brief civil war with Hamas in Gaza that Hamas won. “Meshaal’s speech will outline the priorities of the Hamas movement in the coming future, and especially the implementation of reconciliation [with Fatah],” Hamas spokesman Sami Abu Zuhri told Reuters. Clearly aware of the yearning among ordinary Palestinians for an end to the divisions that have weakened their cause on the world stage, Meshaal repeatedly returned to the subject during his many stops around Gaza on Friday. “With God’s will … reconciliation will be achieved. National unity is at hand,” Meshaal shouted through a microphone at the ruins of one house destroyed last month by an Israeli air raid that killed 12 civilians, including four children. But reconciliation is easier said than done. While Hamas promotes armed resistance against Israel, Fatah says it wants a negotiated deal. Equally problematic is that both are embedded in their power bases, with their own security forces that they do not want to give up. Meshaal ran Hamas from exile in Syria from 2004 until January this year when he quit Damascus because of President Bashar al-Assad’s war against Sunni Muslim rebels, whose religion and politics are closer to those of the Palestinians. He now divides his time between Qatar and Cairo. His abrupt departure from Syria initially weakened his position within Hamas: ties with Damascus and Tehran had made him important, and with those links damaged or broken, rivals based within Gaza had started to assert their authority. Despite regaining the initiative during the Israeli conflict, working closely with Egypt to secure the truce, he says he plans to step down as leader shortly. Hamas has been staging a secretive leadership election for the last six months and some insiders said the huge welcome Meshaal has received in Gaza will put pressure on him to stay on as the group’s overall chief. (The Guardian)]]>