Branislav Mladic told Serbia’s Vecernji Novosti newspaper that he had also nursed the fugitive through a stroke and at one point feared he might die.

In the end, police arrested Gen. Maladic at the cousins house last year and he is now on trial at the UN war crimes tribunal in The Hague. 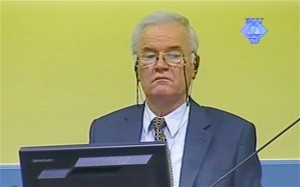 “He is member of the family and I refuse to disown him,” said Branislav Mladic.

“What kind of person would I be if I had refused to help my cousin?”.

A Serbian court is considering what action to take against Branislav Mladic for harbouring the fugitive and will reaxch a verdict next Wednesday.

Bruno Vekaric, a spokesman for Serbia’s war crimes court, told AFP that prosecutors had reached a deal with Branislav Mladic “that he pleads guilty and in exchange he will be given a suspended sentence of one year.”

Branislav Mladic told the paper he had stayed in touch with his cousin in The Hague with phone calls and letters.

Ratko Mladic was on the run for 16 years before being arrested on May 26, 2011, at his cousin’s house in the village of Lazarevo, some 80 kilometers (50 miles) northeast of Belgrade.

The 70-year-old is being tried by the International Criminal Tribunal for the former Yugoslavia for genocide, war crimes and crimes against humanity for his role in Bosnia’s 1992-95 war.

The inter-ethnic conflict in the former Yugoslav republic claimed some 100,000 lives.