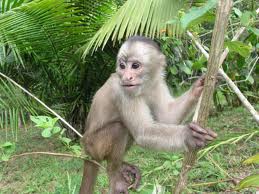 Diplomacy typically isn’t monkey business, but the folks at the U.S. Embassy in Sri Lanka recently had their usual routine disrupted by a wandering primate. The embassy invasion began on Dec. 20, when an an e-mail went out to employees of the facility in Colombo notifying them that the ground floor doors were locked because a monkey was trapped in the building and instructing them to use alternate exits. “A little bit different than a Kabul ‘lock down!’” observed one worker there whose previous tours of duty were perhaps a bit more dangerous. We’re unclear exactly what kind of monkey it was, but speculation was that it was a toque macaque, a medium-sized specimen common in Sri Lanka — generally harmless to humans, and, with a swirl of hair not dissimilar to Donald Trump’s,pretty adorable. There was apparently trouble when removing the visitor, since a plea soon went out for anyone with experience with wild animals (who says our diplomatic corps isn’t a talented bunch?) to help out. The day ended with the monkey business still at hand. Day Two of the siege ended happily, with the little fella (or perhaps it was a lady monkey, we’re not sure) ultimately vaulting the embassy wall, urged on with bananas and encouraging shouts from burly Marines and a group of off-duty drivers on the scene. We’re told he landed in the old British High Commission compound. “Elvis has left the building,” a staffer reported to a friend. State Department Press Office Acting Director Chris Hensman confirmed the diplomatic visit, explaining that the unexpected guest had gotten stuck in the building’s ventilation system. “The visitor eventually departed the building safely and unharmed after a 24-hour ad­ven­ture,” he said. “We thank the Sri Lanka Wildlife Department for their help with humanely resolving this issue.” Now, the intruder is apparently the Brits’ problem, though perhaps we should name it an ambassador-at-large. (Washington Post)]]>