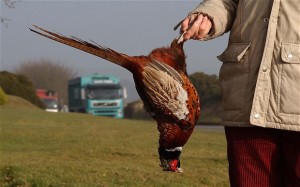 Lawmakers in the US state have overwhelmingly passed a bill allowing locals to salvage meat from the carcasses of wild animals killed in road accidents.

When signed into law by the governor, Montana could become “the ultimate drive-through destination for adventurous foodies”, the website Huffington Post noted.

Steve Lavin, the legislator who introduced the bill, said that the idea came to him as he drove the open highways of the predominantly rural state and started to count the carcasses lining the road.

“It really is a sin to waste a good meat,” said Larry Jent, a state senator who also supports the legislation.

All wild animals were included in the initial draft. But amid fears that there would be an incentive for motorists to hit sheep, bears and bobcats, whose parts have financial value, Mr Lavin limited the legislation to deer, elk, moose and antelope.

The bill outlaws deliberately striking an animal. But some have expressed concerns that “you kill it, you grill it” legislation could nonetheless encourage such collisions.

The Montana Department of Fish, Wildlife and Parks, which would have to oversee the new rules, has also identified dangers if the meat has spoiled or the animal carried a disease.

But in a Western state where the outdoors tradition is strong, such concern carry little weight. And as Britain and Europe continue to wrestle with the scandal of contaminated meat, at least Montanans would know what they were bringing home from roadkill. (The Telegraph)