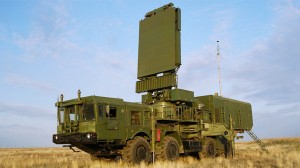 Four mobile radar stations designed for S-300 and S-400 air defense batteries have been added to the shield covering Moscow against airstrikes. The new all-altitude detectors can track up to 100 targets, be they missiles, drones or manned aircraft.

The addition of the hardware was announced on Saturday by DeputyÂ  Commander of the Aerospace Defense Forces, Major General KirillÂ  Makarov.

â€œThose intelligence systems can detect aerial targets, includingÂ  cruise missiles, at a long distance. Their use allows timelyÂ  detection and countering of an enemy airstrike when necessary,â€Â Â  the general, who heads all Russiaâ€™s air defense troops, said.

The 96L6E target acquisition radar is an optional component forÂ  newer versions of S-300 and all S-400 air defense batteries. TheÂ  mobile radar is attached to a unit when it is deployed forÂ  autonomous operation and cannot rely on stationary radar stationsÂ  to detect and identify targets. It can detect aircraft, includingÂ  planes, helicopters, drones and missiles, at a range of up toÂ  300km and track up to 100 of them simultaneously.

It came as a replacement to two separate radar systems, whichÂ  sweep low altitudes and mid-to-high altitudes respectively.Â  Unlike them the 96L6E covers all altitudes. It can serve as aÂ  command post or feed data to a separate battle station forÂ  automated tracking and engagement of targets.

The radar is supplied in two configuration designs, the moreÂ  common being the self-propelled one-vehicle carrying all theÂ  equipment and a power generator on a single chassis. It can beÂ  deployed from retracted position to combat readiness in fiveÂ  minutes.

The antenna can be raised on an optional 24 meter or 40 meterÂ  mast rather than use its dedicated turntable, which enhances theÂ  radarâ€™s ability to detect low-altitude targets in forested andÂ  hilly terrain.

Russiaâ€™s capital has been traditionally the most heavily-guardedÂ  location in the country in terms of air defense. When the US andÂ  Soviet Union agreed to limit anti-missile technologies in 1972 toÂ  reduce Cold War tension, they limited the number of sitesÂ  protected from a ballistic missile strike to one in each country.Â  Moscow was chosen by the Soviets.

Throughout the country the Russian Airspace Defense Forces detectÂ  and track an average of 800 aircraft daily as part of their job. (RT News)