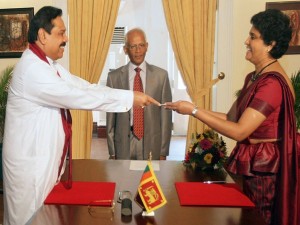 Sri Lankan President Mahinda Rajapaksa will remove Chief Justice Shirani Bandaranayake within the next few days, a presidential spokesman said. Presidential spokesman Mohan Samaranayake told to the Colombo media that under the constitution once parliament decides under a 2/3rds majority to impeach the Chief Justice then the President must act accordingly. “There is no other option than to remove her,” Samaranayake said. Asked when she is likely to be removed, he said there is no specific date but it will happen within the next couple of days. The Sri Lankan Parliament on Friday voted by a majority to impeach Bandaranayake, with 155 in favour and 49 against it. Meanwhile there is speculation that former Attorney General Mohan Peiris may be appointed as the new Chief Justice.]]>