North Korea has threatened to scrap the armistice which ended the 1950-53 Korean War if the South and US continue with an ongoing military drill. 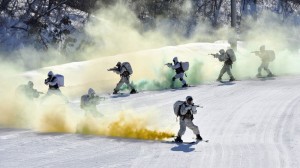 Pyongyang warned it will cancel the Korean War ceasefire agreement on March 11 if the US and its “puppet South Korea” do not halt their joint drills.

“We will be suspending the activities of the KPA representative office at Panmunjom (truce village) that had been tentatively operated by our army as the negotiating body to establish a peace regime on the Korean peninsula,” KCNA quoted the spokesman as saying.

The announcement from Pyongyang comes as South Korean and US troops launched their annual joint military drills on Friday. Some 10,000 US troops and 200,000 South Korean soldiers are currently taking part in the exercises.

North Korea had previously warned the US commander in South Korea of “miserable destruction” if the US military went ahead with the two-month-long exercise, Yonhap News Agency reported on Friday.

The North and South are still technically at war after the civil conflict ended in an armistice rather than a peace treaty.

During a visit in Qatar on Tuesday, US Secretary of State John Kerry said he hoped North Korea would take part in negotiations over its nuclear weapons program rather than threaten to end the armistice.

Pyongyang’s threat follows reports that Washington and Beijing have drafted a series of sanctions to be circulated among UN Security Council members in the wake of North Korea’s third nuclear test last month. Details of the tentative sanctions remained murky, with UN diplomats telling Reuters on condition of anonymity they hoped to receive the draft resolution at Tuesday’s Security Council session.

On Tuesday, Russia’s Ambassador to the UN Vitaly Churkin said that Russia supported the latest round of draft sanctions against North Korea, and a resolution could be voted on as early as Thursday.

The US Ambassador to the UN Susan Rice also said Tuesday that the draft resolution would significantly expand sanctions against North Korea.

The United States and other members of the international community have viewed North Korea’s third nuclear test as putting the isolated state one step closer towards developing a nuclear weapon which can target America.

North Korea has framed its nuclear weapon’s program as a counter to US aggression which dates back to the 1950s war.

In February, a source close to the highest levels of government in Pyongyang told Reuters that “a fourth and fifth nuclear test and a rocket launch could be conducted soon, possibly this year.” The source continued that the fourth test would be much larger than the third, with an equivalent of 10 kilotons of TNT.

Despite the threat to end the ceasefire, North Korea is not yet ready to pursue a path of war, Glyn Ford, an expert on East Asia and former MEP told RT.

“There’s a difference between saying you no longer recognize an armistice and actually starting shooting again. They’re not quite the same thing,” he said.

Ford believes that with the latest satellite and nuclear tests, the Supreme Leader of North Korea Kim Jong-Un has effectively shown his strength to the country’s powerful military, decreasing the likelihood that further tests will be carried out.

“I think he [Kim Jong-Un] is more likely to be turning away once we get through the next month or so towards looking at economic modernization rather than repeating the missile and the nuclear tests. I could be wrong, of course. It’s very difficult to read North Korea, but it seems to me that that’s where the thinking is.” (RT News)