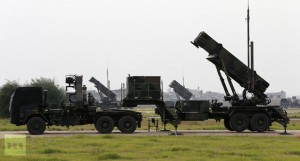 NATO has declared operational the first Patriot anti-missile battery deployed in southern Turkey, set to intercept possible rockets fired from Syria. The other five units are expected to be in place and operational over the next few days. The first battery to go combat ready was provided by the Netherlands, according to NATO. The unit is the latest version of the US-made Patriots, which is optimized for intercepting incoming rockets. Itâ€™s deployed in the city of Adana. Other Patriot systems, which are expected to be set up and made fully operational by the end of January, will be stationed in the Turkish cities of Kahramanmaras and Gaziantep. The United States, Germany and the Netherlands are providing two such anti-missile facilities each. NATO claims the deployment of the surface-to-air missile Patriot systems is â€˜defensive onlyâ€™ and â€˜it will in no way support a no-fly zone or any offensive operationâ€™. Turkey has raised fears that more violence could spread across the border from Syria, including the possible use of chemical weapons, following an incident earlier in October, when several shells of Syrian origin fell on Turkish territory, killing several civilians. Ankara retaliated with artillery strikes. It later asked for NATO help in December to beef up its air defenses against a possible Syrian attack. The request was granted, as the United States, Germany and the Netherlands decided to send Patriots to Turkey, along with a contingent of 1,200 soldiers to operate them. The Syrian government has described the NATO deployment as a provocation, while Russia and Iran have protested against the deployment of Patriot missile systems. â€œThe more military hardware you accumulate in one place the more risk you have that this hardware one day would be used,â€ Russiaâ€™s Foreign Minister Sergey Lavrov told RT earlier in December. â€œAs for the purpose of this deployment, yes, I read and hear that some experts believe that if it is intended to prevent any Syrian crossfire then it could be positioned a bit differently. And as it is envisaged to be positioned, some people say it is quite useful to protect the American radar which is part of the American missile defense system they are building quoting, â€˜the threat from Iranâ€™. If this is the case then it is even more risky, I would say, because this multiple purpose deployment could create additional temptations.â€ Turkey has already witnessed some negative reaction inside the country, amid protest still underway. Many of the local population in the port cities, where the missiles due to be based, are strongly against the deployment. In the town of Kahramanmaras protesters burnt US, NATO and Israeli flags several days ago. Is there a war of Syria against Turkey? No, there isnâ€™t. These missiles are for Israel and against Iran,â€ Turkish citizen Malik Ecder Kirecci, told the media. Like many Turkish locals, independent observers are also skeptical about the nature of the Patriotâ€™s mission and if the missiles will protect the Turks at all. â€œConsidering that the US wants to use Turkey as an advance missile shield, the Patriots might be stationed there forever. Turkey wanted to modernize its weapons anyway and had already started taking bids for similar weapons systems. Under these circumstances, the weapons are most likely directed against Iran,” Dmitry Polikanov, the vice president of the Moscow-based PIR Center and an independent think-tank, told RT. The North Atlantic alliance also deployed Patriot batteries on Turkish soil during the US-led invasion of Iraq 10 years ago. However, they were never used and were withdrawn a few months later. (RT News)]]>