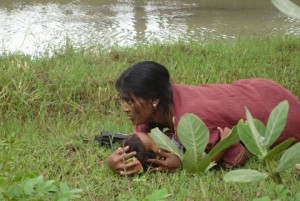 A political grouping pushing for devolution of power to the provinces yesterday estimated the number of LTTE cadres killed during eelam war IV at 15,000. Dr. Wickremabahu Karunaratne, of the Nava Samasamaja Party (NSSP), claimed that they were among 150,000Â TamilsÂ that perished in the war (July 2006 to May 2009).

Karunaratne was responding to a query by Colombo media, at a media briefing called by former Deputy Mayor of the CMC, Azath Sally at No 122, Barnes Place, Colombo 7. Sally was acting on behalf of recently formed Muslim-Tamil National Alliance.

The alliance was represented by TNA MP Suresh Premachandran and Mano Ganeshan of the Democratic Peopleâ€™s Front (DPF).

TNA MP Premachandran reiterated his longstanding call for an independent international investigation into accountability issues as the party didnâ€™t have faith in President Rajapaksaâ€™s government. The Jaffna District MP said that the long suffering Tamil speaking people wouldnâ€™t have confidence in the government or the “murderous” army. He said that an external inquiry would be nothing but a prerequisite for post- national reconciliation.