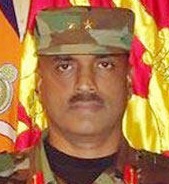 Maj. Gen. Boniface Perera  has been appointed the Sri Lankan security forces commander in the Wanni. He assumed duties in his new position yesterday (Aug. 25). He succeeds Maj. General Sumedha Perera, who is due to leave for overseas training. He is previously the security forces commander of the east. On April 20, Maj. Gen. Perera launched a novel he had written a book about the Sri Lanka’s war against Tamils.]]>