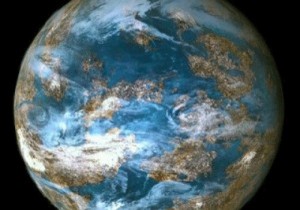 Astronomers have discovered a new super-Earth that may have an Earth-like climate and be just right to support life Â in the habitable zone (the zone where it is not too cold, nor too hot for liquid water to exist around the nearby star HD 40307. It is one of the three new super-Earths found around the star that has three other low-mass planets orbiting it.

HD 40307 is a dwarf star that is somewhat smaller and less luminous than the Sun that is about 42 light years away (12.88 parsecs). The previously discovered planets around it are called hot super-Earths because they orbit too close to the star to support life.

The international team was led by Mikko Tuomi of the University of Hertfordshire and Guillem Anglada-EscudÃ© of the University of GÃ¶ttingen. The researchers used newly developed software that is able to process the signals more thoroughly and thereby reveal the presence of the three additional planets. The team reanalyzed spectra taken with the HARPS spectrograph through the European Southern Observatory public archive.

The most interesting of the new planets is in the outermost orbit from the star, a distance that is similar to the distance between the Earth and our Sun. Its mass is at least seven times the mass of the Earth. The team said the planet is likely to be rotating on its axis while in orbit, possibly creating a day/night cycle and an Earth-like environment.

The star HD 40307 is a perfectly quiet old dwarf star, so there is no reason why such a planet could not sustain an Earth-like climate said Anglada-EscudÃ©.