A comet headed towards the Sun has the potential to be bright enough to be visible in the daytime skies of the northern hemisphere in 2013. The possibility of the stellar display was recently announced by two Russian astronomers. 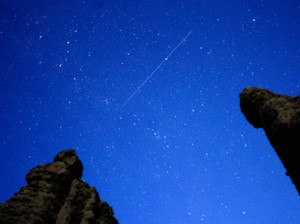 Officially known as C/2012 S1 (ISON), the comet was discovered by Artyom Novichonok and Vitaly Nevsky. The duo spotted it in images taken last Friday with a reflecting telescope at the International Scientific Optical Network (ISON) in Kislovodsk in southern Russia. The comet is barely distinguishable from stars in the constellation of Cancer right now, but is likely to brighten a lot as it approaches the Sun.

According to a Minor Planet Center report, on November 28, 2013, the comet will be at its perihelion, passing just 1.2 million kilometers from the surface of the Sun. If it survives the trip, the comet would then travel towards Earth. A month later, it will pass by our planet at a distance of about 63 million kilometers and be visible to the naked eye throughout January. According to some estimates, the comet could have a long tail and be brighter than the Moon.

This scenario is far from certain, however. Cometsâ€™ behavior is difficult to predict, and C/2012 S1 is just as likely to fizzle out as become a global spectacle. Right now, the comet is near Jupiter, and is expected to rapidly brighten in August next year. Whether it will disintegrate or blaze across the sky remains to be seen.

One point of intense speculation among media and astronomers is the similarity between this new comet and the Great Comet of 1680, an object that left a brilliant streak across the sky during that year. The two comets may be fragments of a single object that broke apart in the distant past. (RT News)