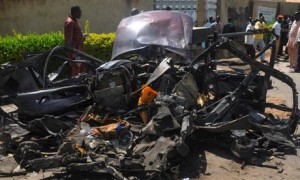 Gunmen in northern Nigeria have attacked a camp belonging to a construction company, killing a guard and kidnapping seven foreign workers from Britain, Greece, Italy and Lebanon, according to local authorities.

The raid, which resulted in the biggest kidnapping yet in a region under attack by Islamist extremists, happened on Saturday night in Jama’re, a town in a rural part of Bauchi state.

Gunmen first attacked a prison, burning two police trucks, said the Bauchi state police spokesman Hassan Muhammed. They then targeted a worker’s camp for the construction company Setraco, which is in the area building a road, Muhammed said. The gunmen shot dead a guard before kidnapping the foreign workers, he added.

Adamu Aliyu, the chairman of the local government, identified those kidnapped as one British citizen, one Greek, one Italian and four Lebanese. Britain’s Foreign Office said it was looking into reports that a UK national had been kidnapped.

No group immediately claimed responsibility for the abductions. Nigeria’s predominantly Muslim north has been under attack by the radical Islamist sect known as Boko Haram in the last year and a half. The sect is blamed for killing at least 792 people in 2012 alone, according to an AP count.

Boko Haram, whose name means “western education is sacrilege” in the Hausa language of Nigeria’s north, has demanded the release of all its captive members and has called for strict sharia law to be implemented across the country. The sect has killed both Christians and Muslims in their attacks, as well as soldiers and security forces.

The group, which speaks to journalists in telephone conference calls at times of its choosing, could not be immediately reached for comment.

Foreigners have long been abducted by militant groups and criminal gangs for ransom in Nigeria’s oil-rich southern delta, and have become increasingly targeted in Nigeria’s north as the violence has grown.

In May gunmen in Kaduna state shot and killed a Lebanese and a Nigerian construction worker while kidnapping another Lebanese employee. Later that month kidnappers shot dead a German hostage during a rescue operation.

Last year gunmen who authorities say have links to Boko Haram kidnapped an Italian and a British man in northern Kebbi state who were later killed during a rescue operation by Nigerian soldiers backed up by British special forces. The sect later denied taking part in that abduction.

In December, more than 30 attackers stormed a house in the northern Nigeria state of Kaduna, killing two people and kidnapping a French engineer working on a renewable energy project there.

Chinese construction workers have been killed by gunmen around Maiduguri, the north-eastern city in Nigeria where Boko Haram was formed. In the most recent attack, assailants attacked North Korean doctors working for a hospital in Yobe state, stabbing two to death and beheading a third. No group claimed responsibility for that attack.

Foreign embassies in Nigeria have issued travel warnings regarding northern Nigeria for months. Worries about abductions have increased in recent weeks with the French military intervention in Mali, as its troops and Malian soldiers try to force out Islamist fighters who took over that nation’s north in the months following a military coup.

Last week the US embassy in Nigeria’s capital, Abuja, put out a warning following the killings of polio workers in the northern city of Kano and the killing of the North Korean doctors. “The security situation in some parts of Nigeria remains fluid and unpredictable,” the embassy said. (The Gurdian