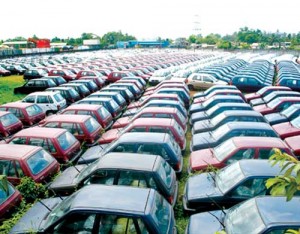 Prohibitive duties may edge out Indian vehicles from Sri Lankaâ€™s market while exemptions to those coming from Japan will give them an added advantage in the market.

Amidst this move, the Sri Lankan Government has granted clearance for a Chinese investor to set up car-assembly plants in Hambantota and Gampaha. An investment of US $ 20 million (about Rs. 2.6 b) is being made.

A Customs official who spoke on grounds of anonymity said high taxes had been placed on cars and trucks from India. The official said a technicality placed imports of cars from Japan at an advantage. Whilst 80 per cent of the cars imported into Sri Lanka were from India and under 1000cc engine capacity, no such vehicles were brought down from Japan.

Sampath Merenchige, President of the Vehicle Importersâ€™ Association of Lanka told to the Colombo media that the popular Maruti or Alto would go up in price by a minimum of Rs 250,000. Other importers said the price of Indian trucks would increase by more than a million rupees.