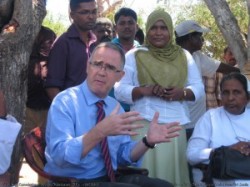 This advice has been reviewed and reissued with amendments to the Local Laws and Customs section (posing for photographs in front of statues of Buddha)â€ says a British government updatedÂ  travel advisory warning. The British Government had updated its travel advisory warning yesterday, but with no changes to its warnings on organised crime, rape and sex crimes, an upsurge of nationalism and anti-western rhetoric. â€œYou should avoid posing for photographs standing in front of a statue of Buddha. The mistreatment of Buddhist images and artefacts is a serious offence and tourists have been convicted for posing for such photos,â€ it says. Last week the Sri Lankan government said it will challenge the British Government travel advisory warning Britons over an upsurge of nationalism, sexual offences and anti-western rhetoric.  ]]>