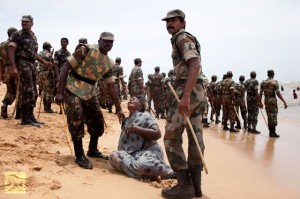 Internationally acclaimed academician  Noam Chomsky of  Massachusetts Institute of Technology of the  United States has warned that Kudankulam could be another  Bhopal disaster in waiting. In a solidarity letter to the struggling people he said: “Nuclear energy is a very dangerous initiative, particularly in countries like India, which has had more than its share of industrial disasters, Bhopal being the most famous.”

“I would like to express my support for the courageous people’s movement protesting the opening of the Kudankulam Nuclear Power Plant,” added Chomsky.

Avram Noam Chomsky is a noted linguist, philosopher, cognitive scientist, logician, historian, political critic and activist. He has worked as a professor in the department of linguistics and philosophy at MIT. In addition to his work in linguistics, he has written on war, politics, mass media and a many other areas. Chomsky was cited more often than any other living scholar from 1980 to 1992 and he was voted the ‘world’s top public intellectual’ in a 2005 poll. Described as the ‘father of modern linguistics’, he is most well known for his book called ‘Manufacturing Consent’.

“The support of Chomsky came as a major boost to the fishing community of Kerala, Tamil Nadu and Sri Lanka, who are unfortunately the first victims of the Koodankulam Nuclear Power Plant,” said T Peter, secretary, National Fish Workers’ Forum. “We hope more and more groups and individuals will support the struggle.”

“Chomsky is one of the most leading existing internationally renowned left intellectuals today. It is surprising that while such a great personality has expressed support to the Koodankulam struggle, the left in India is still confused about their stand on the hazards of nuclear energy,” said Civic Chandran, activist writer. Chomsky’s response came as a part of the efforts of the anti-nuclear activists to campaign on Koodankulam issue through the net in a unique manner through a well known website called www.countercurrents org. The site has been publishing posters using statements in support of the Koodankulam struggle from well known national and international personalities every day along with their photographs from October 11, onwards.

Mairead Maguire, the 1976  nobel peace prize winner and Irish peace activist also expressed her solidarity to the Koodankulam struggle. She said the struggle is an inspiration to the world. She added: “I offer my solidarity with the brave people of Koodankulam, as they non-violently resist the Koodankulam nuclear power plant in their community.

The courageous villagers-men and women-who are risking their lives do so to safeguard the lives of their children, the livelihood of all their fishermen,and their environment. We support you all, continue to be brave, refuse to be silent, and you will overcome. Your actions are an inspiration to many of us around the world and we join you in spirit. Shanti.”

The campaign through posters on the internet began with former chief minister of Kerala, V S Achuthanandan stating: “We do not need this nuclear bomb. The central government must immediately stop all activities regarding this plant. The Kerala government must wake up with an understanding on the threat from this on the people and act immediately.”

While the stand of Achuthanandan on nuclear energy was being debated, others across the globe joined the campaign with words of support.
“What the poor people of Kudankulam is doing is what anyone would struggle for the protection of one’s own life and future. It is not surprising that the Government which has become a part of the nuclear lobby could not understand this. Let them learn from the widespread lessons of  Chernobyl and Fukushima said Binoy Viswarm, former minster of in Kerala government.

Meanwhile, Christian Juhl, Member of Parliament and spokesman, the Red-Green Alliance, Denmark said: We fully support the courageous struggle against the nuclear power station in Kudankulam. In Denmark the resistance against nuclear power was strong and well organised and today Denmark is free of nuclear energy. Our resistance was able to close the nuclear power station Barseback in  Sweden close to Denmark.”
Terming it as another Fukushima of the future, Siritunga Jayasuria, former Presidential candidate of  Sri Lanka said: “Kudankulam nuclear plant is a Fukushima in the making. It will be another genocide of the Tamils, Sinhalese and Indians waiting to happen. Sri Lanka is just a stone’s throw away from Kudankulam. We the Sri Lankan people, Tamil, Sinhalese and Tamil speaking Muslims oppose it, along side our brothers and sisters of Idinthakarai and Kudankulam.

Questioning whether all safeguards are in place before option for nuclear energy, Annie Raja, national council member, CPI: “We agree that electricity is needed for development. But the main question is whether we have used all safer options for the production of energy before we think of nuclear option. This question is leading to a lot of suspicions.”

Appealing for public pressure,  Paul Murphy, Member of the  European Parliament for the Socialist Party of Ireland said: “Public pressure is needed to break the power of the greedy nuclear lobby. Kudankulam struggle is vital and I will do my utmost to spread the word about your struggle within the trade union and anti nuclear movement in Europe.”

“Socialist Alternative (SAV) Germany condemn the state terror unleashed on the peaceful protesters of Kudankulam. We demand the immediate withdrawal of the police force. We demand that the government heed to the sane voice of the anti-nuclear movement and immediately stop the killer project which is bound to put the people, flora and fauna, the fragile environment and the other species in irrevocable danger,” said Lucy Redler, spokesperson of Socialist Alternative (SAV), Germany.

“The government must immediately stop the brutal treatment of protesters and shut down the plant without further delay. The investment should be channelled to renewable energy production. All development should be people centric and not for the profits of the few. Tamil Solidarity campaign will continue to support the Kudankulam anti-nuclear struggle and will continue to build support internationally,” said Senan.

“I am totally in solidarity with people in Kudankulam and elsewhere protesting against nuclear reactors. This we do not need in the world. We do not understand the long term dangers and must ban all new installations,” said Sarabhai.

“Atomic power is against humanity. Human beings have not evolved enough to handle atomic power. At source level atomic energy is no different from atomic weapon. Every nation has a hidden agenda of producing atomic Weapon. Say no to atomic power,” said Kavignar Thamarai.

“The Kudankulam Nuclear Power Project will have serious health consequences, not only for the local people, but also for the people of the entire region. This will be accompanied by large scale loss of livelihood for the fisher folk communities of the entire area. The long term risks of a nuclear accident are unpredictable,” warned Sen.

“Without a fully worked out disaster management plan, Kudankulam or any other nuclear reactor is a sure passport to disaster. This is an unwarranted risk. A nuclear reactor is potentially more dangerous than an atomic bomb, because each 1,000 MW reactor contains radio active materials equivalent to 200 nagasaki bombs,” said Parameswaran.

“I stand in solidarity with the villagers of Idinthikkarai who are resisting Kudankulam reactor. I happened to be in Japan in March 2011 when the earthquake damaged the Fukushima reactor. After the disaster, almost every country that used nuclear energy declared that it would change its policy. Every country, except India,” said Roy.

The campaign through Counter Currents is generating more and more national and international support through face book, twitter, e-groups, websites and many other ways of internet sharing.

“The anti-nuclear activists have always used creative ways of campaigning and this poster campaign through the internet is certainly a new step,” said Subramanian, state convenor of the Kudankulam Solidarity Group.