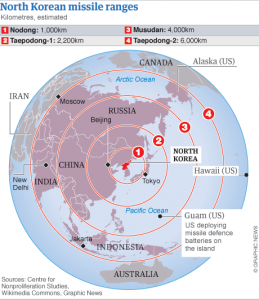 South Korea’s defence minister has confirmed that Pyongyang has moved a missile with “considerable range” to its east coast, but said there were no signs that North Korea was preparing for a full-scale conflict despite the continuing standoff.

The confirmation from Kim Kwan-jin came hours after North Korea’s military announced it had been authorised to attack the US using “smaller, lighter and diversified” nuclear weapons.

Kim said he did not know why the North had moved the missile, but suggested it “could be for testing or drills”.

He dismissed Japanese media speculation that the missile could be a KN-08, which is believed to be a long-range missile that – if operable – could hit the US.

Kim told a parliamentary committee meeting that although the missile had considerable range, it was not sufficient to hit the US mainland.

His description could suggest a missile known as the Musudan, which has a range of 3,000km (1,800 miles). That would make Japan and South Korea potential targets along with US bases in both countries.

There are doubts, however, about the missile’s accuracy and range, and some suspect that long-range missiles unveiled by Pyongyang at a parade last year were actually mock-ups.

Kim said that if North Korea were preparing for a full-scale conflict, there would be more signs of the mobilisation of troops and supplies.

So far, he said, South Korean military officials had found no evidence of such preparations.

“[North Korea’s recent threats] are rhetorical threats,” he said. “I believe the odds of a full-scale provocation are small.”

He did, however, add that North Korea might mount a small-scale provocation as it did in 2010, when it shelled a South Korean island, killing four people.

The Pentagon announced on Wednesday night that it would deploy a missile defence system known as the terminal high altitude area defence system to the US Pacific territory of Guam to strengthen regional protection against a possible attack.

The deployment is the biggest indication yet that Washington regards North Korea’s sabre-rattling as more worrying than similar threats over the past few years. It also suggests the US is preparing for a long standoff.

The $800m (Â£529m) battery was not due for deployment until 2015, but will now be in place within weeks. There had been debate within the Pentagon about deploying it first to the Middle East to protect Israel, but the threat from North Korea is now viewed as more serious.

A Pentagon statement said the deployment was “a precautionary move to strengthen our regional defence posture against the North Korean regional ballistic missile threat”.

On Wednesday, the US defence secretary, Chuck Hagel, said North Korea posed “a real and clear danger” to South Korea, Japan and the US.

“They have a nuclear capacity now,” he told the National Defense University in Washington. “They have a missile delivery capacity now. And so, as they have ratcheted up their bellicose, dangerous rhetoric, and some of the actions they have taken over the last few weeks, present a real and clear danger.”

His response contrasted with more muted comments by other members of the Obama administration over the past few days as they sought to reduce tensions.

China also voiced strong fears about rising tensions on the Korean peninsula. Its foreign ministry spokesman, Hong Lei, told reporters in Beijing that the country’s deputy foreign minister, Zhang Yesui, had expressed serious concern over the crisis at a meeting with ambassadors from the US and South Korea.

The Kaesong industrial complex, six miles north of the heavily fortified border that has separated the two countries for six decades, is viewed as the last remaining symbol of co-operation.

The North has disrupted operations at Kaesong before, but Wednesday’s move caused particular concern as South Korea and the US attempt to respond to a catalogue of provocations by Pyongyang.

The disruption at Kaesong, which draws on investment from more than 100 South Korean firms and employs workers from both countries, was seen by some experts as a sign of a swift deterioration in an already tense situation.

In recent weeks, North Korea has threatened a nuclear attack against the US and its overseas bases â€“ a hollow threat, experts say, given the regime’s relatively primitive nuclear and missile technology â€“ and declared a “state of war” with South Korea.

China is North Korea’s only remaining ally and its biggest aid donor. Its description of the situation in such bleak terms is being interpreted as a sign of growing frustration with the unpredictable behaviour of the 30-year-old North Korean leader, Kim Jong-un. (The Guardian).