<![CDATA[Following the recent exposure by Lanka e news uncovering the hidden truths of the brutal, uncouth child rapist Swaziland King , and the red carpet welcome that was accorded by our own â€˜Maharajaâ€™ in order to pedestal this rapist as a most exalted King , while the whole world on the contrary was frowning on him as a barbaric rapist responsible for his countryâ€™s bankruptcy , the pro MaRa henchmen are in the process of concocting views and popularizing them to counter the exposures . <a href="http://www.eelamenews.com/?attachment_id=101900" rel="attachment wp-att-101900"> 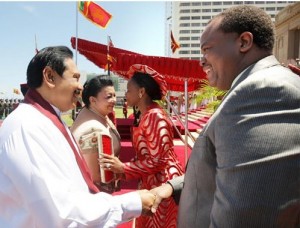 They are propagating two theories : the first theory tries to sustain the view that the Reed Dance is a custom in Swaziland and even running a harem is its tradition . We cannot oppose that custom, for it exists entirely in another country . The second theory advanced is : according a welcome to a guest visiting our country is our dutiful custom. Hence ,to call him as a muddy water reptile and insulting him is not appropriate. But , Lanka e news based its theories on an entirely different premise. What we advocated was , we who are living in a modern world of refined traditions should not resort to hole and corner methods of supporting and propping the brutal and bestial activities of barbaric immoral leaders , and make them as models to be followed. The Reed Dance of the Swazi people is also not our concern, but what concerns us is the subsequent actions of rapist Miswathi , their King conducting himself in the most inhuman and immoral direction, unbecoming of a leader in a modern civilized worldÂ . This bestial King Miswathi arrived in SL with one of his so many women , a few days ago. What is most shameless is our own self proclaimed MaRa receiving him most Royally giving him a red carpet welcome. In other words , MaRa accorded a most reprehensible grand welcome to Miswathi, the King who is considered as a villain possessed of the basest human qualities by the entire world and therefore virtually discarded as unworthy of any official recognition. That is, the welcome accorded by our â€˜Maharaja MaRaâ€™ is meriting condemnation , for he had disgraced our own nation before the world by exalting such a sadistic brute .We are herein carrying photographs taken to confirm this. Miswathiâ€™s â€˜animals in human formâ€™ henchmen examining whether the girls are virgins before they perform the Reed Dance in front of this beast of a King Miswathi is depicted in these pictures. The first and second photographs show how the poor helpless teenagers between 12 and 14 years are being placed on mats and examined. Thereafter a certificate is issued to confirm their virginity. The second photograph shows the girls with the certificates . 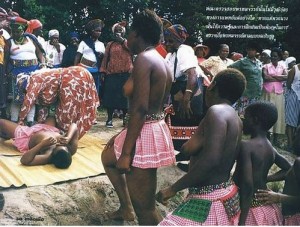 How can a nation entrenched in cultured traditions and moral values forbear a Royal treatment being accorded to such a sex starved sadistic animalistic King Miswathi by our Maharaja â€˜MaRaâ€™? Can we just dismiss this issue as a custom in that country, when the whole world in the modern context of decent society , moral and social values , is introducing stringent laws and meting out punishment to such sexual â€˜ beastsâ€™ who are deflowering young girls? Arenâ€™t we Sri Lankans belonging to that refined and cultured world which considers those inhuman ruthless acts as absolute violations of fundamental rights of the victims , as worst child abuse, and as heinous crimes committed on women ? Didnâ€™t Gautama Buddha whose teachings a majority of Buddhists follow in SL emphasize on these crimes, the sins and evils attaching thereto as well as the deterrent punishment to be meted out long before the UN introduced these laws and punishments ? Is our â€˜Maharaja MaRaâ€™ not a follower of those teachings ? or is he by all these actions trying to introduce a new â€˜Miswaathi rape cultureâ€™ in this land of Buddhists who bitterly abhor even at the present moment the raging rapes in SL under our â€˜ Maharaja MaRaâ€™ reign? A true Buddhist will never condone this conduct or actions. Will you believe that Miswathi the bosom pal of our own MaRa has taken as his wife this year a victim who is younger than his own daughter born to his first wife, as reported by BBC news. 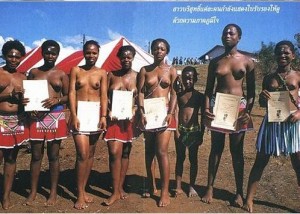 Of course we can just ignore this as a custom of that country if such a rapist beast was not invited and not accorded a Royal welcome in our country. But when our MaRa Maharaja pedestals Miswathi, while the whole world denounces his conduct , it will certainly look down on us too. On the other hand, no matter how high and mighty or what high status a King is in, if he is a transgressor of fundamental rights of the people, human rights and childrenâ€™s rights , a civilized nation should have the spine to stand erect and discard him once and for all. The nation must follow their conscience without wavering . Hence, the contention that it is their custom and tradition , and therefore we should bear with them , should be uprooted, and rejected . Next, it is our custom to receive a guest arriving in our country duly and with warmth. This barbaric sadist arrived in SL not as a tourist. He was brought into this country after a number of diplomatic exchanges . Hence Miswathi is not just a guest , rather he is one who was invited because his barbaric and sadistic traits had been impliedly exalted by our countryâ€™s leaders who are cast in the same mould. It is a universal truth that child rapes have reached unprecedented levels in SLâ€™s history. Under our own â€˜MaRa Maharajaâ€™, latterâ€™s henchman and crony Saruwa Sunil , a local body chief , recently celebrated with a grand party to mark his latest of his countless rape victims, attended by Govt. Minister Dallas Alahaperuma and Presidentâ€™s brothers , thereby tacitly and unofficially approving these rapes, and indirectly inspiring this infamous rapist to go on committing these crimes with greater ardor. 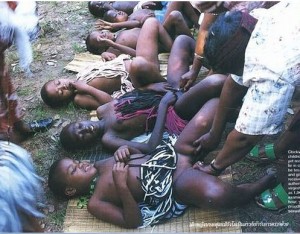 When the News Editors inquired from the President about the rapidly mounting rape crimes in SL, his answer was, he cannot post a police officer in every home to guard against them , and that protection should be looked into by the elders in the homes. Doesnâ€™ t this answer suggest that the President who is the highest in the hierarchy of this country is showing least concern for the child rapes and is disclaiming responsibility to give protection ? This is precisely why we , at Lanka e news published the story which by comparison showed the closeness of Miswathi of Swaziland and the President, MaRa of SL in content and intent. It is a matter for deep regret that those who are most vociferous about the rights of women and children are remaining silent and not taking a serious view of this issue. These photographs herein which display the barbaric and sadistic nature of Swaziland King ought to make our own muddy water reptile â€˜Kingâ€™ Hiswaatha to pray , hope and say in earnest â€˜wonâ€™t I get a fortunate moment like thisâ€™. This may be because of his own experience with girls . It is a well and widely known fact that MaRa killed his own daughter by throwing her up in the air. It is also a fact that he had until today not given a pinkama in the memory of that infant girl. Moreover , he escaped punishment by implicating a girl employed in his Walawwa in that murder. It is therefore natural this muddy water reptile who has the experience in relation to the fairer sex , sheds crocodile tears for girls and women when rapes are raging in the country , but in fact follows Miswathiâ€™s brutal and rapist policies . It is therefore little wonder he exalts and pedestals Miswathi, according him a red carpet welcome. We have received another report just as we were about to conclude this article. Based on this report , to satisfy the sexual lust and gratify the pleasures of the sadistic Miswathi and his group , who were staying in the Hilton hotel, our muddy water reptile had provided them with a bevy of young girls . We shall bring more reports on the pimps and those who entrusted that task to them shortly. wide pictures depicting how virginity is determined (LankaeNews).]]>