Farmers from Kantale in the eastern district of Trincomalee are condemning moves by the Sri Lankan armed forces to take over civilian administration. 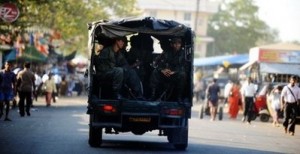 On 5th of July, Sinhala farmers staged a public protest in Kantale against military commanders interfering on civilian matters. The Gangathalawa farmers association leading the protest were shocked when the military approached farmers with offers on water management. Farmers were critical of the military intervening to silence opposition to the governmentâ€™s controversial tourism plans around a major irrigation tank. Opposing the allocation of Kantale tank as a sea plane landing site, farmers were resisting the military ruling on civilian issues.
â€œFarmers have nothing to do with the military. Why should the military give us solutions instead of the irrigation department or the agricultural ministry,â€ said Indika Paranavithana of the Gangathalawa farmers association. He added that the military taking a upper hand clearly signals the path to militarisation in civilian matters.

The Kantale tank provides water to more than 18,000 acres of paddy land cultivated mainly by Sinhala farmers. The tank is also the primary source of drinking water for residents of Trincomalee town. While maintaining that retaining sufficient water levels to enable smooth sea plane landing will restrict essential irrigation to paddy cultivation, farmers fear that construction of large scale tourist resorts around the Kantale tank will deprive them of their land. Environmentalists have also expressed concern that pollution due to sea plane landing will make the water unsuitable for human consumption.

Military commanders ofÂ  the east who tried to explain government proposals met stiff resistance by farming leaders on the 31st of July. Eastern Army Commander Brigadier Mahinda Weerasuriya accompanied by regional naval and air force chiefs told farmers representatives in Kantale that the tank and its environments shall not come to harm due to government plans. At a meeting in the Kantale local authority (Pradeshiya Sabha) headquarters he condemned a leaflet issued by farmers calling to unite to fight for the Kantale Tank.

â€œI stood on alert when I saw the word ‘fight,â€ Brigadier Weerasuriya warned farmers that the leaflet was a â€˜threat to national securityâ€™. A farmer confronted the military commander saying that it is a democratic right to fight moves against people.

â€œWe donâ€™t want our identity taken over by tourism,â€ he added. Secretary of the Kantale project farmers association told the assembly that he feared militarisation as no ministry has given an assurance to farmers while the security forces were readily available with â€˜solutionsâ€™.