Madhu Nagaraja reached his goal of swimming across Lake Ontario on Sunday, hours after injury ended another swimmerâ€™s dream of completing the same feat.

Â Nagaraja arrived at Coronation Park in Oakville, only a few blocks away from his home, at 9:37 p.m. 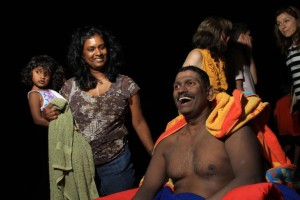 He overcame fatigue and strong overnight winds to complete what is considered one of the three toughest swims in the world. According to the Lake Ontario Swim Team, heâ€™s the 50th person to make the crossing.

Â About 150 of Nagarajaâ€™s friends and family members cheered for him when he touched shore, friend and land crew member Doug Harrison said.

Â Nagaraja and a boat of 12 crew members left Port Dalhousie at 9:08 p.m. on Saturday.

Â Among his companions were a coach, navigator, doctor and three pacers who took turns swimming with him and offering encouragement.

Â When the aviation instructor could not lift his left arm out of the water to complete each stroke, he knew something was wrong. A discussion with his coach convinced him to pull out.

Â â€œHe is doing fine,â€ said Katherine Czok. â€œHe feels he made the right decision … had he gone longer he could have seriously injured himself.â€

Â Czok works with the Juvenile Diabetes Research Foundation. Hamel had dedicated his 52-km swim to the cause, raising $12,000.

Â Hamel and Nagaraja are two of seven swimmers aged between 14 and 60 attempting to swim across Lake Ontario this summer.

Â Knowing how much work it is to plan a swim across the lake, Nagarajaâ€™s team was cheering on Hamel and felt bad when he withdrew, Harrison said.

Â Nagaraja spent 10 months training for the Lake Ontario challenge. In 2004, he crossed the English Channel in 12 hours and 31 minutes.

Â â€œHeâ€™s a very accomplished adventurer if you take a look at whatâ€™s he done in his life,â€ Harrison said. (The Star).