Obama goes into the final hectic weekend of campaigning as favourite, holding a slight edge over Mitt Romney in the polls and buoyed by better than expected job figures. 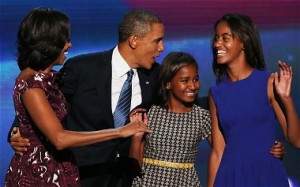 As the presidential candidates began a four-day, round-the-clock marathon of campaign events in swing states, polls on Friday showed Romney’s momentum had stalled, leaving Obama ahead in most of the battlegrounds, including Ohio, which both sides see as the key to the White House.

Three polls in Ohio on Friday put Obama head, the latest a CNN/ORC poll had the president on 50% to Romney’s 47%. Nate Silver, the New York Times pollster, increased Obama’s chances of winning to 80%.

Republicans were bemoaning the days lost to the campaign because of hurricane Sandy, providing an opportunity for Obama to appear presidential and dominate the news cycle. They blamed Romney’s lost momentum on the storm and its aftermath, though polls suggest it had stopped well before Sandy hit.

The dominant issue on Friday was the publication of new jobs figures showing an increase of 171,000 in October, better than predicted, although not good enough to prevent the overall job rate rising slightly from 7.8% to 7.9%.

The figures provided a small boost to Obama at the end of a week when he won plaudits for his handling of Sandy, including from Republican New Jersey governor Chris Christie, and the endorsement of New York mayor Michael Bloomberg.

Republicans had been hoping for a poor set of figures to send those yet to decide which way they will vote in Romney’s direction. Speaking in Wisconsin, Romney said: “The jobless rate is higher than it was when president Obama took office, and there are still 23 million Americans struggling for work. On Tuesday, America will make a choice between stagnation and prosperity.”

In the first of three stops in Ohio on Friday, Obama appeared in front of about 5,000 supporters in Hilliard outside the state capital, Columbus. He made a particular bid to woo employees of the car industry who represent one in eight of the Ohio workforce. “The American auto industry is back on top,” he said, an allusion to the federal bailout that he authorised.

Obama will be in Ohio on each of the final days of campaigning, in addition to dashes to Colorado, Florida, Iowa, New Hampshire, Virginia and Wisconsin. To add stardust to proceedings, he will be joined on stage by Stevie Wonder on Sunday in Cincinnati, and by Jay-Z and Bruce Springsteen in Columbus on Monday evening.

Romney too is going for star power. On Friday night he is staging a big rally in West Chester, Ohio that will pack in almost 100 senior Republican politicians including former secretary of state Condoleezza Rice, former New York mayor Rudy Giuliani, governors Rick Perry and Bobby Jindal, and the golfer Jack Nicklaus.

In a packed schedule he will vist, on top of Ohio, New Hampshire, Iowa and Colorado on Saturday, Iowa, Ohio, Pennsylvania and Virginia on Sunday and Florida, Virginia and Ohio on Monday. He will end his campaign in Manchester, New Hampshire, on Monday night.

Both the Obama and Romney camps publicly expressed confidence that they will win on Tuesday.

Henry Barbour, one of the rising stars of the next generation of Republicans, expressed “cautious optimism” on Friday. Barbour is leading a group of 50 Republican volunteers from his native Mississippi to campaign in Florida.

One of the reasons for his optimism was what he described as “voter intensity”:  people on the doorsteps who said they will definitely go out to vote for Romney on Tuesday.

“I think Sandy clearly froze the race. It gave the president a chance to have photo opportunities in New Jersey,” Barbour said.

Bob Haus, a Republican strategist in Iowa, predicted a last-minute surge for Romney. “I think Iowa and other states will go down to the last voter,” he said. (The Guardian).