In a joint appearance with Governor Chris Christie, President Obama promised victims of Sandy that “We are here for you and we will not forget.”

“We will follow up to make sure you get all the help you need until you rebuild,” the president said in Brigantine, New Jersey, after meeting with rescue workers and residents.

“Our biggest priority right now is getting power turned back on,” he said. 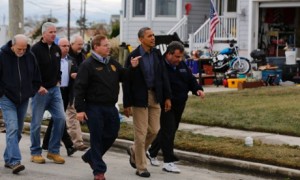 Christie praised the president for his focus on the recovery effort. “I cannot thank the president enough for his personal concern and compassion for our state and the people of our state,” he said.

We’re going to wrap up our live blog coverage of the Sandy recovery effort for the day. Here’s a summary of where things stand:

â€¢ The death toll from Sandy rose to 58 in the United States and 71 across the Caribbean. 30 died in New York City, according to the mayor.

â€¢ The National Guard continues to evacuate residents in Hoboken, New Jersey. As many as 20,000 were trapped in their homes as of this morning. Search and rescue work was ongoing on the Rockaway peninsula in Queens.

â€¢ President Obama surveyed damage to the New Jersey coastline with Governor Chris Christie. The president promised residents that they would face a minimum of red tape in seeking disaster relief and that the federal government would follow up to make sure states had the necessary aid.

â€¢ An estimated 6 million are without power across the country. Just under 2 million lack power in New York state. In New York City the figure was 643,000.

â€¢ More than two feet of snow fell in the mountains of West Virginia, trapping some residents in their homes and making roads impassible.

â€¢ Emergency crews continued to pump water from tunnels under the East River and from subway stations in lower Manhattan.

â€¢ Schools are to remain closed in New York for the rest of the week. Subway service into and from downtown Manhattan also is shut down. An estimated 230,000 Manhattan residents remained without power. A potentially greater number lacked steam heat. Those utilities were expected to come back online by the weekend.

â€¢ In an effort to avoid the traffic gridlock that ruled the day in Manhattan, the mayor and governor imposed a ban on low-occupancy passenger cars for most tunnels and bridges. Today some 5.5m extra riders attempted to take the bus, in addition to the regular 2.3 passengers.

â€¢ The New York Stock Exchange re-opened, powered by backup generator. Mayor Michael Bloomberg gave a thumbs-up and rang the opening bell to whoops from traders on the floor. (The Guardian)