President Barack Obama said Sunday that his historic trip to Burma was not an “endorsement” of the country’s reformist government but rather acknowledgement of steps made towards democracy.

Speaking at the start of a visit to south-east Asia, Obama praised Burmese president Thein Sein for moving the formerly secretive nation forward after years of repressive military junta rule. 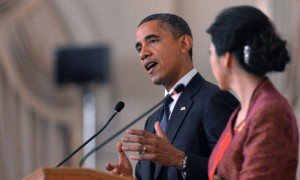 He denied that Monday’s tour of the country â€“ the first by a serving US head of state â€“ was premature, stating: “If we had waited until they had achieved a perfect democracy, my suspicion is we would be waiting a long time.”

The comments were made during a press conference in neighbouring Thailand. The three-day trip comes just two weeks after Obama was re-elected to serve another four years in the White House.

As the first overseas trip of his second term, it has been seen in the context of a pivoting of America’s interests away from Europe and the Middle East towards Asia.

But the visit to Burma has had its critics. Although he will be applauded by some for encouraging the once-closed nation down the road towards democracy, others have noted that those reforms have yet to be consolidated.

Moreover questions remain over the regime’s commitment to human rights, with special attention paid to its past record of political persecution and the brutal repression of ethnic minorities.

Hundreds of prisoners were released by Burma last week ahead of Obama’s visit but human rights campaigners said no political prisoners were included.

Obama said Sunday that he would address lingering concerns with the Burmese government.

“I’m not somebody who thinks that the United States should stand on the sidelines and not want to get its hands dirty when there’s an opportunity for us to encourage the better impulses inside a country,” he told reporters.

He continued: “This is not an endorsement if the Burmese government, this is an acknowledgment that there is a process under way inside that country that even a year and a half ago, two years ago, no one foresaw it.”

Obama went on to say that under Sein, there had been an “articulated commitment to further political reform” but that no one was “under the illusion that Burma has arrived”.

Responding to criticism that the trip had come too early down the road of reform, Obama said: “If we had waited until they had achieved a perfect democracy, my suspicion is we would be waiting a long time.”

But he pledged to “give voice to the much greater progress that needs to be made in the future” during his talks with Sein.

The US president said he would “congratulate them on having opened the door” but stress that “the country has a long way to go”.

Obama added that he took guidance from the example of Aung San Suu Kyi, the much-admired Nobel peace prize laureate, whom he is due to meet in Rangoon during the visit. (The Guardian).