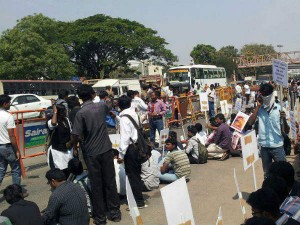 One Million Indian Students will go on hunger strike on March 20th, urging India to support a US Resolution against Sri Lanka at the current UN Human Rights Council Session in Geneva.

Students are also calling for a UN Referendum in Tamil areas of Sri Lanka, so that Tamils can determine their own future. Additionaly, Students are urging to stop genocide of Tamils in Sri Lanka.

A wave of student protests have swept through the State of Tamil Nadu for over a week now, brining tens of thousands of students to the streets urging India to support the US Resolution at the UN.

Several hundred students already started hunger strike around the State, resulting in some taken to hospitals after their condition become worse. More students volunteered to observe fast unto death as soon as the condition of other already observing hunger striker’s condition worsened.

Police are struggling to contain mass rallies due to sheer number of the students actively participating in the agitation. Protests were held even in remote parts of the State. Students also blocked trains and roads, prompting the police to arrest hundreds of students.

The Government has ordered immediate closure of all Universities and Colleges to try to contain the spreading agitation.

The emotive Sri Lankan Tamils issue was resurrected recently when British media released photographs that suggest that the 12-year-old-son of Prabhakaran, the chief of the LTTE, was executed in cold blood by Sri Lankan forces in 2009.

* The US is expected to move the motion against Sri Lanka on War Crimes for killing over 70,000 Tamils and raping hundreds of Tamil women by Sri Lankan Security forces in five months during the final months of the war that ended in May 2009.

All political parties in Tamil Nadu have been pressuring the Indian government to vote against Lanka. The Congress-led UPA government had voted against Sri Lanka in another resolution last year. (LNW)