<![CDATA[ member of the US navy Seal team that killed Osama bin Laden has written a book on the operation, triggering fresh questions about the possible public release of classified information involving the assassination in Pakistan. US military officials have said they do not believe the book has been read or cleared by the defence department, which reviews publications by military members to make sure no classified material is revealed. <a href="http://www.eelamenews.com/?attachment_id=101769" rel="attachment wp-att-101769"> 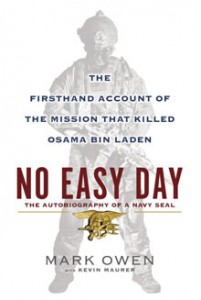 The book, entitled No Easy Day and scheduled to be released on 11 September, comes amid a heated debate over whether active or retired military personnel should engage in politics. “I haven’t read the book and am unaware that anyone in the department has reviewed it,” said Pentagon press secretary George Little. White House and CIA officials said the book had not been reviewed by their agencies. The author is said to have been a member of Seal Team Six and one of the first people through the door when the Abbottabad raid took place. He claims to have been present at Bin Laden’s death. Separately a group of retired special operations and CIA officers have launched a campaign accusing President Barack Obama of revealing classified details of the mission and turning the killing of Bin Laden into a campaign centrepiece. The group complains that Obama has taken too much credit for the operation. Their public complaints drew a rebuke from General Martin Dempsey, chairman of the joint chiefs of staff, as well as other special operations forces, who called the partisan criticism unprofessional. Dempsey said such public political involvement by members of the armed services eroded public confidence and trust in the military. The author of the upcoming Bin Laden book has left the military and is using the pseudonym Mark Owen. In a press release from publisher Dutton, Owen describes the book as an effort to “set the record straight about one of the most important missions in US military history”. He said the book is about “the guys” and the sacrifices that the special operations forces make to do the job and is written in the hope that it will inspire young men to become Seals. Often special operations forces must sign nondisclosure agreements and revealing unauthorised information can constitute a crime. Christine Ball, a spokeswoman for the Penguin imprint Dutton, said the work was vetted by a former special operations attorney provided by the author. “He vetted it for tactical, technical and procedural information as well as information that could be considered classified by compilation and found it to be without risk to national security,” Ball said. Defence department spokesman Lieutenant Colonel James Gregory said that if the book revealed classified information about the raid the Pentagon would “defer to the department of justice”. According to Pentagon regulations retired personnel, former employees and non-active duty members of the reserves “shall use the DoD security review process to ensure that information they submit for public release does not compromise national security”. The CIA might weigh in because it ran the secret Bin Laden mission. Earlier this year a federal judge ruled a CIA whistleblower writing under the pseudonym Ishmael Jones had to forfeit future money he earned from The Human Factor: Inside the CIA’s Dysfunctional Intelligence Culture, a scathing book he wrote about the spy agency. He had failed to get approval from his former employer before publication, the judge ruled. In 2010 the defence department claimed a former army intelligence officer’s war memoir threatened national security. The Pentagon paid $47,000 to destroy 9,500 copies of the book, called Operation Dark Heart: Spycraft and Special Ops on the Frontlines of Afghanistan and the Path to Victory. The book was written by Anthony Shaffer, whose lawyer said the army reserve cleared the manuscript beforehand but the Defense Department later rescinded this. (The Guardian).]]>