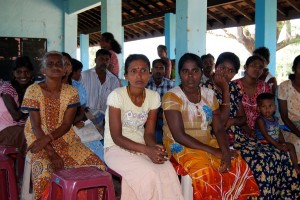 Over 400 people were hospitalized in Batticaloa today after suffering from food poisoning, the police said.

Batticaloa sources said that the people had attended a function in Batticaloa last evening and fell sick after consuming food at the event.

He said that most of those who fell ill were suffering from diarrhea and were not in a serious condition.

The Batticaloa hospital said that several people were admitted to hospital last night but by this morning more people sought treatment.