A Pakistani diplomat in Sri Lanka has been named in the FIR filed by Tamil Nadu police in the suspected espionage case busted in Thanjavur district recently, a senior police officer said.

“We have named Amir Zubair Siddiqui, a diplomat in the Pakistan High Commission based in Colombo in the case busted recently.

He said the diplomat’s name has been added to the FIR, “based on the statement of Thamim Ansari,” who was arrested on Monday last by state intelligence while he was heading for Tiruchirapalli airport to take a flight to Colombo.

Twenty five CDs and photographs of various important installations in the state were reportedly seized from him. 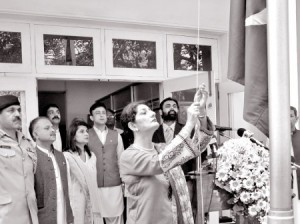 The diplomat is believed to have instructed Ansari to take visuals of defence establishments in India and pass it on to him, sources said.

“A detailed enquiry will bring out more information in the case and who are all behind this,” another officer said.

Ansari, a native of Athirampattinam near Pattukottai in Thanjavur district of Tamil Nadu, was exporting onions to Sri Lanka. He had developed contact with the diplomat, who reportedly asked him to send the photographs.

According to Ansari, the diplomat had wanted pictures of Naval stations, Coast Guard station and Army installations in the state, police said.

He was produced before a local court which remanded him to judicial custody till October 1. (PTI)