<![CDATA[Over a dozen Pakistani air force planes have crashed in roughly the past 18 months, raising concerns about the health of an aging fleet that officials are struggling to upgrade because of a lack of funds. A significant number of the air force's combat aircraft are nearly half a century old and have been called on in recent years to help the army fight a domestic Taliban insurgency that has killed thousands of people. This has added to the strain on a force that has historically focused on countering the threat from Pakistan's neighbour and archenemy, India. Pakistan has turned to the US and China for help in modernizing its air force, but economic woes have strained the government's budget, even for the country's powerful military. Tension with the US over a host of issues, including the covert raid that killed Osama bin Laden last year, also hasn't helped. Shahzad Chaudhry, a former senior Pakistani air force officer, said the number of planes that have crashed "would be worrying for any air force." "If I were air force chief, I certainly wouldn't want to see over a dozen airplanes being lost," said Chaudhry. "Obviously we need to bring those numbers down." At least 13 planes have crashed since May 2011, many because of technical problems, according to a record maintained by The Associated Press. The air force did not respond to request for comment on the crashes. The most recent accident occurred on Nov. 22, when a Dassault Mirage fighter jet crashed on a routine night training mission in central Punjab province, killing the pilot. The air force said at the time that it was investigating the cause of the crash, but eyewitnesses said the plane caught fire before it fell out of the sky. Nearly half the planes that have crashed were decades-old Mirage fighters. They make up at least a quarter of the force's fleet of about 400 combat aircraft, according to the website GlobalSecurity.org. Many were built nearly 50 years ago and acquired from foreign militaries that had already retired them. "We bought them at almost throw-away prices, brought them over, overhauled them and continue to operate them," said former Pakistani air force chief Tanvir Mahmood. "This was our compulsion because of the financial constraints that we had." Chaudhry, the former senior air force officer, said the Mirage was a "very sturdy platform" that shouldn't fail easily. "But when you have the intensity of an operational combat environment, problems tend to be there," said Chaudhry. The crashes raise questions not only about the age of the aircraft, but also flight maintenance practices, said Sajad Haider, a celebrated former air force pilot who has written a book about the service. Other planes that have gone down include the Chengdu F-7 fighter jet bought from China, the JF-17 Thunder fighter jet jointly developed with China and Pakistan's Mushshak trainer, a propeller plane. The most advanced fighter jet operated by the Pakistani air force is the F-16 Fighting Falcon, over 60 of which were purchased in various batches from the US over the past three decades. U.S. military support came to a halt in the 1990s because of sanctions imposed on Pakistan over its nuclear program, but resumed in 2001 when Washington needed Islamabad's support to fight al-Qaida and the Taliban in Afghanistan. Military assistance largely dried up once again over the past two years because of renewed tensions between the two countries, although the U.S. did deliver more than a dozen new F-16s purchased by Pakistan. One of the reasons Pakistan turned to China for help with its air force was the country's troubles with the U.S. The government has purchased over 100 F-7 fighter jets from China, mostly in the 1980s, and has reportedly ordered more advanced FC-20 fighter jets in recent years. <a href="http://www.eelamenews.com/?attachment_id=107093" rel="attachment wp-att-107093"> 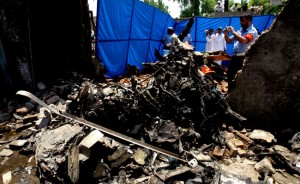 Pakistan is also domestically producing the JF-17 fighter jet, jointly developed with China, but it has not yet entered full service. “The JF-17 program was pushed through during my tenure of office because we knew we couldn’t live with these old Mirages and some of our old Chinese planes for too long,” said Mahmood, who served as air force chief from 2006 to 2009. The current head of the air force, Tahir Rafique Butt, told Pakistan’s Senate defense committee at the end of November that the force was struggling to modernize its equipment and technology because of a shortage of funds, said the head of the committee, Mushahid Hussain. While Pakistani military spending makes up about 20 percent of the government’s budget, the air force is lower down the totem pole than the powerful army. Hussain said the air force was doing the best with what it has, but the recent spate of crashes “was linked to use of technology that is fast becoming outmoded and obsolete.” “That reinforces the argument the air force was making to us about a lack of resources,” said Hussain. (AP)]]>