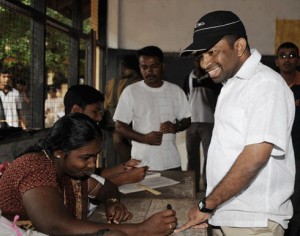 The office of a UPFA Provincial Council candidate has been attacked in Kathankudy by supporters of the Pillaiyan paramilitary group on Sunday, SL police sources said.

The candidate, P. Prasanthan, is a secretary to the former Eastern Province Chief Minister Sivanesathurai Chandrakanthan alias Pillaiyan.Prasanthan’s office furniture in Kathankudy has been severely damaged by a group of men who came on motorcycles, police sources said.