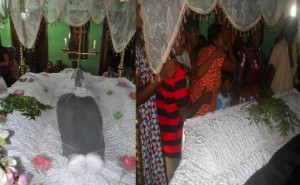 Body of Tamil political prisoner Mariyadas Dolrukshan ((36) reported dead while in the coma condition at the Ragama teaching hospital would be taken towards his village Pashaiur in Jaffna Friday (10th August).

Funeral ceremony of the prisoner would take place on Saturday.

Protest against the death of Dilrukshan schedule to stage at Jaffna on next wenesday.

End of various problems body of the Mariyadas Dilrukshan handed over to his parents last afternoon.

These political party members have provided security to the vehicle carries the coffin of Dilrukshan. 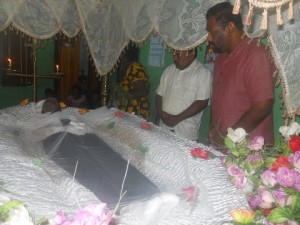 Politicians and the human rights activists condemns the death of Nimala Ruban (28) and Dilrukshan while at the prison custody.

Ganesh Nimalaruban and Mariyadas Dolrukshan, two of the Tamil political prisoners, who were allegedly attacked during a rescue drama in Vavuniya Prison last month, died on Wednesday (8).