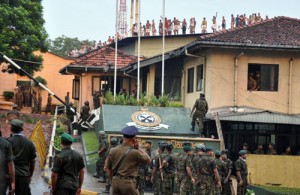 The Sri Lankan army opened fire on a three wheeler in which some prisoners had attempted to escape, the Associated Press reported.

An Associated Press journalist outside the Welikoda prison saw prisoners waving rifles atop the roof of the building.

Some other prisoners piled into a three-wheeled vehicle and began driving toward a main city road before security forces outside the prison opened fire. The vehicle stopped and three unmoving bodies could be seen.

Dozens of LankanÂ security officers then entered the prison and gunfire could be heard. Lankan Police spokesman Prishantha Jayakody told the Associated Press police commandos went to the prison to conduct a search and were attacked by inmates hurling stones. He declined to provide more information.