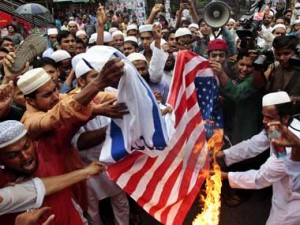 Hundreds of Muslims in Sri Lanka protested against an anti-Islam film produced in the United States, calling for its creators to be hanged.

About 300 protesters marched in Sri Lanka’s capital, Colombo, on Wednesday, carrying signs and banners that read, “Ban anti-Islamic film all over the world.

U.S. should apologize to Muslims.” They chanted, “Hang the producer and director of the film.”

Protesters also spit on and walked on U.S. and Israeli flags during the demonstration, which was organized by an Islamic group called Sri Lanka Thaweed Jamath.