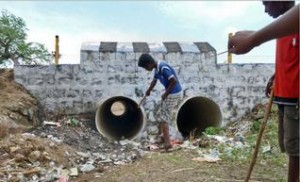 Security was strengthened at the Sri Lankan Refugee Camp in N.Mettupatti as tension prevailed over the murder of six-year-old Sirija alias Srinidhi, an Indian media reports.

According to police sources, the girl was raped before being killed.

â€œThe victimâ€™s naked body was found in a cement pipe under the culvert on Tiruchi Road, about a kilometre from the camp, during the late hours of Sunday. The body had a deep slit on the throat and injuries on the arms. She could have been murdered elsewhere as there were no bloodstains in or near the pipe,â€ a police officer said.

Her mother Jayaseeli (38) said around 3 p.m. on Sunday, Sirija, the second of her three children, went out to the open ground near the camp to answer natureâ€™s call. â€œWe searched for her from 4 p.m. but could find only her body,â€ said the inconsolable mother.

N. Sivakumar (14) and his friend Dhayalan (11) said that they were playing cricket when they saw the girl come near the play area. â€œWe asked her to go to a safer place as she could be hit by the ball. She immediately left the place,â€ they added. People in the camp wore a worried look and many of them did not go to work on Monday. â€œSirija was liked by all for her smart talk and approach and it came as a shock when we found her deadâ€, said Saroja (46), a neighbour. According to her, it was the first such incident in the 20-year-old camp.

N. Navamani (27), another neighbour, said that most parents were daily wagers. â€œThey usually go to the market in Valayapatti, about five km from the camp, on Sunday afternoons for their weekly purchase. The culprit involved in the cruel act could have taken advantage of this time to commit the crimeâ€, she said.