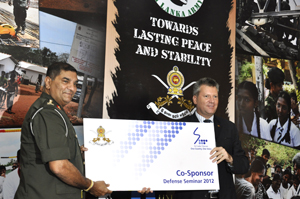 The conference will be conducted on five main themes called as 5Rs.Â Secretary to the Sri Lankan Defence and Urban Development Ministry Mr Gotabaya Rajapaksa will deliver the key note address while guest speakers from UK, US and India will participate in the event. The first international defence seminar was conducted in 2011 with the participation of delegates from 41 countries.

Meanwhile, theÂ human rightÂ activists demanded the India, the UK and the US to withdraw from participatig the seminar. They also voiced for the release of the prisoners of war and political prisoners.

The Sri Lankan defense forces have since faced accusations of slaughtering thousands of innocent Tamil civilians, including women and children.