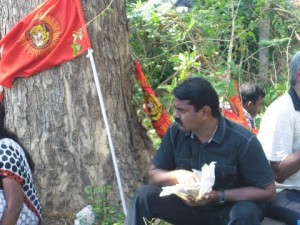 Naam Tamilar party (We are Tamils) announced they would stage protest and meeting against TESO conference schedule to hold on 12th of August at Chennai.

Leader of the NTP Movement film director and Tamil activist Mr Seeman made this announcement during a media briefing yesterday.

Many Tamil nadu parties and Tamils express their protest over this conference and they say this is another drama of the former TN chief minister. However he fails to take care of this issue.

Tamil eelam is possible only by changing politics in Tamil Nadu, awaking people over here is most important thing and make sure that we bring a Perfect Tamizhan to rule us. Due to this we have decided to hold protest on 12th of August, NTP activist said.